The current mania for “job guarantee” policies is making the Sandwichman anxious. I’ve been on the full employment beat for over 20 years so I think I have a pretty good grasp of the terrain. First principle is that there are no panaceas. My favorite policy option — reduction of working time — is not a panacea. Neither is yours.

Like my learned friend Max B. Sawicky, I am in favor of a job guarantee — provided it meets MY criteria. The proposals currently being shopped around don’t. That should not be a fatal flaw. Inadequate policy proposals can serve as the starting point for dialog that can lead to better proposals. From the left, Matt Brunig, and from the center?, Timothy Taylor have offered constructive critiques of the current proposals. I would like to offer a bit of critique from history.

Much of what I would like to say about job guarantees (and full employment), I have already said in one way or another so most of this post will consist of links with brief introductions. They deal with the Political Aspects of Full Employment (Michel Kalecki) and with how those political aspects have played out historically. As I wrote nine years ago, the economics of full employment are not rocket science. It’s the politics that are stupid. Kalecki’s essay was published in The Political Quarterly in 1943 and was based on a lecture delivered at Cambridge in the spring of 1942. I posted it in 14 installments at EconoSpeak in May 2009.

Around the time that Kalecki published his essay, John Maynard Keynes wrote a Treasury Department memorandum spelling out his thoughts on The Long Term Problem of Full Employment. Keynes summed up his hypothesis briefly as

The problem of maintaining full employment is, therefore, the problem of ensuring that the scale of investment should be equal to the savings which may be expected to emerge under the above various influences when employment, and therefore incomes, are at the desired level.

Stately simply, the concept has three moving parts: the scale of investment, expected savings and the desired level of employment. Recognizing that there is both a numerator and a denominator to a ratio, Keynes maintained that ultimately full employment could be maintained by redefining employment. Shorter hours were thus inherently part of the equation:

10. As the third phase comes into sight; the problem stressed by Sir H. Henderson begins to be pressing. It becomes necessary to encourage wise consumption and discourage saving,-and to absorb some part of the unwanted surplus by increased leisure, more holidays (which are a wonderfully good way of getting rid of money) and shorter hours.

Falling somewhere between Kalecki’s political pessimism and Keynes’s policy optimism was William Beveridge’s bureaucratic pragmatism. In Full Employment in a Free Society, he raised the question several times of the implications of full employment policy for collective bargaining:

Under conditions of full employment, can a rising spiral of wages and prices be prevented if collective bargaining, with the right to strike, remains absolutely free?  Can the right to strike be limited generally in a free society in peace-time?

Beveridge’s “solution” to this dilemma was to urge a more statesmanlike attitude from union leaders and possibly compulsory arbitration of wages.

At the opposite end of the spectrum, segregationist Charles Wallace Collins denounced full employment — and Beveridge’s book specifically — as part of a nefarious “road to serfdom” that would ultimately establish a Stalinist-type reign of terror in the U.S.A. As paranoid as that vision may sound, Collins wrote the blueprint for the alliance of white supremacy and economic revanchism that has infested U.S. electoral politics since Richard Nixon’s “southern strategy” in 1968. These are, incidentally, the political forces that control the executive and the legislative branch of the U.S. federal government today and seek to entrench their dominance permanently in the judicial branch.

The right-wing road to Trumpdom did not follow a direct path. One of its early and seemingly innocuous, technocratic turns was the sequestering of “secondary benefits” in the cost-benefit analysis of public works projects. Who would have thought that such an arcane application of the unacceptable nonsense of the Kaldor-Hicks compensation criterion would have such far-reaching consequences? At the time, in the early 1950s, the macro-economic impacts of the new public works austerity regime were drowned out by a massive arms build-up (financed by “siphoning off” some of the growth in GNP that would result from the build-up) and, subsequently the build out of the interstate highway system, rationalized on national security grounds.

The public works projects of the New Deal are pertinent to the job guarantee debate for two major reasons. One is the eclipse of their rationale by defense spending and containment of so-called secondary benefits noted above. The current crop of policy proposals finesses the secondary benefit issue by envisioning job creation as the primary objective. This invites comparison to Keynes’s fable about filling up bottles with bank notes and burying them in abandoned coal mines. Much of the current criticism of JG proposals dwells on that issue of the social utility of JG work, so I won’t bother to elaborate here.

But the second reason has to do with the political circumstances that led to the New Deal adoption of a public works program and that crucially defined its parameters. In 1932, a major public works spending initiative was the second priority of organized labor. Their first priority was a 30-hour work week and that goal came close to Congressional adoption.

Ben Hunnicutt told the story of the Black-Connery 30-hour bill in Work Without End: Abandoning Shorter Hours for the Right to Work. An earlier account of the political horse trading that led from Black-Connery to the N.I.R.A. was given by Irving Bernstein in a 1946 article, “Labor and the Recovery Program” I posted a version of the story with some supplementary information in The Black bill, Green and the Blue Eagle.

There are two aspects of that political wrangle over the 30-hour bill that I overlooked previously. The first is that the American Federation of Labor had adopted a resolution in 1932 authorizing a general strike strategy in support of the proposal and that federation president William Green articulated that strike threat in his Senate committee hearing testimony: 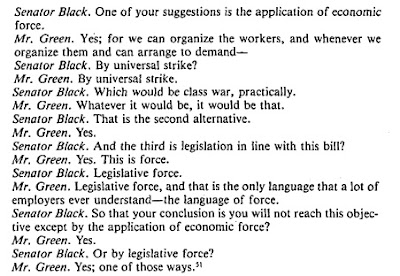 “Which would be class war, practically,” interjected Senator Black. To which president Green replied, “Whatever it would be, it would be that.” The Sandwichman is rather pleased that this turn of events reinforces his view about the connection between shorter hours, full employment and the myth of the general strike. What I also hadn’t realized was that, on the advise of Green, the 30-hour work week objective was built-in to the public works portion of the N.I.R.A. in section 206 of H.R. 5755, which reads, in part:

(2) that (except in executive, administrative, and supervisory positions), so far as practicable and feasible, no individual directly employed on any such project shall be permitted to work more than thirty hours in any one week; (3) that all employees shall be paid just and reasonable wages which shall be compensation sufficient to provide, for the hours of labor as limited, a standard of living in decency and comfort…

The recovery act was passed on May 26, 1933, eighty-five years later, job guarantee proposals from the Levy Institute, the Center on Budget and Policy Priorities and the Russell Sage Foundation assume a 40-hour work week as the expected full-time standard.  This doesn’t mean that they are opposed to a shorter work week — only that they failed to factor it in to their policy analysis. My impression is that the reason for such neglect is that job guarantee proponents view the reduction of working time as a rival and consequently hostile policy option rather than as a complementary one.

Although regrettable, such rivalrous framing of policy alternatives is understandable and not exclusive to the job guarantee camp. For example, Robert Lajeunesse titled his comparison of the two as “Job guarantees versus work time regulation.” By contrast, Andre Gorz incorporated a “right to work” component into his work time reduction proposal. I have been unable to find any response from job guarantee proponents to either Lajeunesse’s analysis or to Gorz’s proposal.

My anxiety about the job guarantee proposals arises, I suppose, from my suspicion that the seemingly technical issues that advocates neglect — or avoid — in their proposals are those that are especially implicated in what Kalecki described as the political aspects of full employment. In other words, to rephrase Senator Black’s question to president Green, “Which would be denial of class war, practically?”