Now that we have the inflation numbers for April, let’s update the wage situation for ordinary Americans.
Real wages YoY are only up +0.2%:

More significantly, they are still down -0.3% from their most recent high 9 months ago:

They are also only up +0.2% for the entire last 2 years and 2 months.
Increased consumption by ordinary Americans isn’t up because they are making more in real terms. Rather, it is because they are working slightly (on average about +0.1) more hours; saving less of their paycheck (down from 3.9% to 3.1% in the last 12 months); and because more people are employed (discussed below).
Real *aggregate* wages tell us how much more in total average Americans are earning. This is up +24.9% since its post-recession bottom in October 2009:

Here’s how that compares with other economic expansions over the last half century: 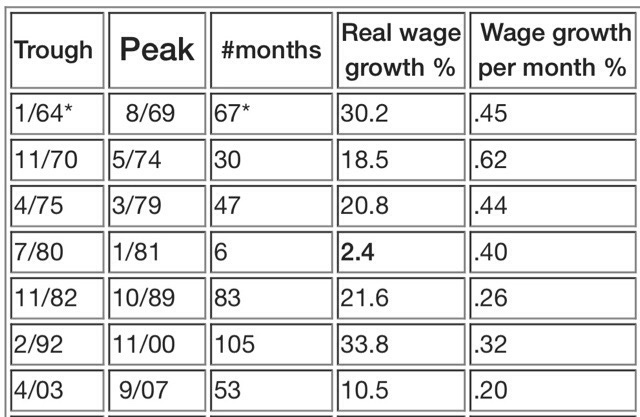 I expect aggregate wage growth to decelerate sharply before the onset of the next recession. It hasn’t happened yet:

Turning from wages to unemployment, weekly initial jobless claims tend to lead the unemployment rate by several months. Just to change things up a little bit, the below graph shows this comparison with the U6 underemployment rate:

Initial jobless claims have been making new 45+ year lows several times in the last 6 weeks, so the decline in the unemployment rate to a new multi-decade low last month was not a surprise, as shown in this close-up of the last 8 years:

The decline in the unemployment rate in the April jobs report has been criticized as being due solely to a decline in the number of people in the labor force. It’s worth noting that if that decline had only been about 30,000 less, the unemployment rate still would have declined, albeit only by -0.1% rather than -0.2%.
Generally speaking, at the moment the economic condition of the American working and middle class is better than it has been in nearly 20 years. But this is mainly due to the low unemployment rate and paltry rate of layoffs, and the steep decline in gas prices between 2014-16 which resulted in “real” wage growth, rather than any significant wage gains.
Comments Off on Real wages and unemployment update: April 2018 | Digg Facebook Twitter |