US/Global Economics
by New Deal Democrat
HEADLINES:
Here are the headlines on wages and the chronic heightened underemployment:
Wages and participation rates
Holding Trump accountable on manufacturing and mining jobs

Trump specifically campaigned on bringing back manufacturing and mining jobs.
Is he keeping this promise?

The more leading numbers in the report tell us about where the economy is likely to be
a few months from now. These were mainly positive.
Other important coincident indicators help  us paint a more complete picture of the present:
Other news included:
SUMMARY
This was an excellent report in terms of labor utilization, decent in terms of jobs growth,

The big declines in unemployment, underemployment, involuntary part time employment, and
persons who want a job now but haven’t looked have nudged us very close to what has been “full
employment” in the past two expansions.  We may be as little as 1.5 million jobs away.
The total gain in employment in the last two months is 279,000, or an average of 140,000
per month for the hurricane-affected month and the recovery. This is no better than mediocre or
average.
That hourly wages for nonsupervisory workers actually *fell* month over month, and are
still only up 2.4% YoY quite simply is awful this late into an expansion.

Bottom line: the late cycle deceleration in YoY employment gains is continuing, and outright
wage deflation come the next recession looms ever larger

First, the 3, 6 and 12 month moving average of establishment job growth is slightly above
150,000/month: 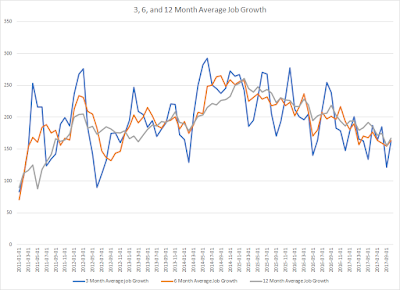 These numbers have been declining since the end of 2014.  As we
are now late-in-the-game of this recovery, I wouldn’t expect more than 150,000 average
month growth going forward.
We’re seeing some weak Y/Y numbers.

The top two charts were released earlier this week in the BEA’s personal
income data.  Real DPI and real DPI less transfer payments are barely getting about 1% on the
Y/Y basis.  Average hourly earnings (bottom chart), which are part of the employment report, are
still weak on a historical basis.
Comments Off on October jobs report: great utilization, decent growth, poor wages (reposted) | Digg Facebook Twitter |