Journalism US/Global Economics
Now may be a good time to remind people that there can be bad arguments for good causes. There may even be good arguments for bad causes. 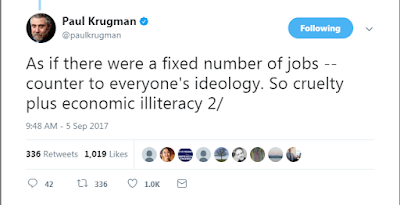 The effect of this unilateral executive amnesty, among other things, contributed to a surge of unaccompanied minors on the southern border that yielded terrible humanitarian consequences. It also denied jobs to hundreds of thousands of Americans by allowing those same jobs to go to illegal aliens.

This is a lie. DACA has not “denied jobs to hundreds of thousands of Americans.” But it isn’t a lie because it assumes the amount of work to be done is fixed. To make that claim trivializes both the mendacity of the Trump administration and the gullibility of people who believe the lies that demagogues tell them. The alleged “fixed amount of work” has nothing to do with it.

To the extent there is economic illiteracy, the economics profession is the main culprit. Economists have shamelessly touted policies that enrich the rich and impoverish the poor and pooh-poohed egalitarian proposals like work-time reduction. For all too many of them, it’s their job. When those policies have exactly the effects they were designed to have, economists become puzzled about where all the inequality is coming from.