A thought for Sunday: the most important issue in the 2016 election was…

A thought for Sunday: the most important issue in the 2016 election was . . .

This is a post I’ve been meaning to write for several months. For a while after the election last year, there was a debate about whether the “economic anxiety” in the (white) working class was the most important factor vs. was it simply a matter of racism. The consensus has nearly settled on the narrative that racism was decisive, to the point where “economic anxiety” has become a taunt, and some who embrace identity politics actively disparage progressive economic issues.

I’m here to show you data that – in part – disputes that consensus. What was the most important issue in the 2016 presidential election?  The below data on that issue all comes from the Voter Study Group, from its survey published several months ago: “Insights from the 2016 Voter survey.”

In the below graphs, the potency of various issues are examined in terms of how well they lined up on a liberal/conservative or favorable/unfavorable axis, but for simplicity’s sake it is pretty clear that they correlate with a vote for Clinton (left) or Trump (right).  The more vertical the line, the more decisive the factor, whereas a horizontal line means that the factor made essentially no difference in whether a vote was for one candidate or the other.  the 2016 results are in red, vs. the 2012 results in gray. What I’ve done is to delete the names of the nine factors they tested, so you won’t be swayed by any pre-existing opinion you might have had about the factor.  Here they are:

I’ll give away one finding right away.  The most decisive factor, shown at the right of the lowermost column, is party affiliation. D’s voted for Clinton. R’s voted for Trump.
But after that, it’s pretty clear that the close runner-up for most decisive factor in how people voted is the issue at the left of the middle column, which was … 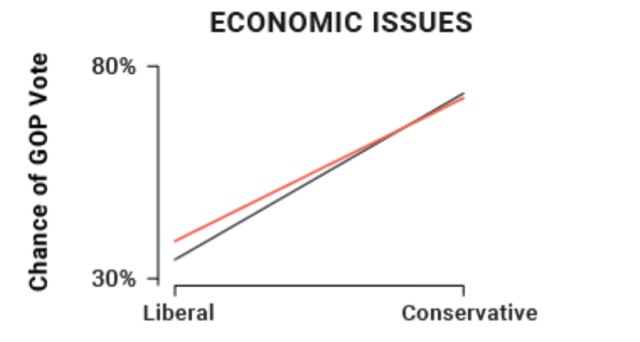 the economy!
That’s right. The single most decisive factor in the 2016 vote was how people felt about the economy.
How can that be true?  After all, haven’t we all heard that racism was dispositive?
The clue is in the difference in slope between the red and gray lines.  Even though the economy was the single most important issue in 2016, it was relatively *less* important than it was in 2012. Graphically it was less vertical in 2016 than 2012. And the difference disfavored democrats.  The economy was equally dispositive for conservatives, but less dispositive for liberals. Put another way, economic progressives voted less in lock-step on the economy in 2016 than they did in 2012.
And where did those votes go in 2016?  The three issues in the top column, and especially the issue at the top left.
But let’s take them in reverse order.  The issue at the top right is nearly horizontal — i.e., it made little difference to voters, but while it didn’t motivate progressives at all, it did have a slight affect on conservative votes compared with 2012.  That issue is: 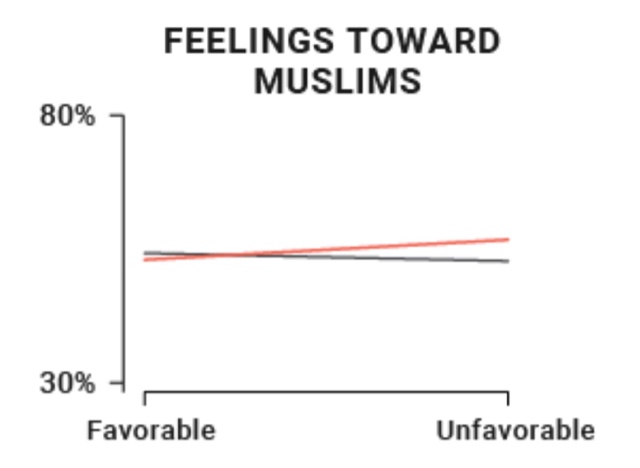 attitudes towards Muslims.
The issue at the top middle had some effect both in 2012, but moreso in 2016. It motivated both conservatives and progressives, but conservatives relatively more.  That issue is: 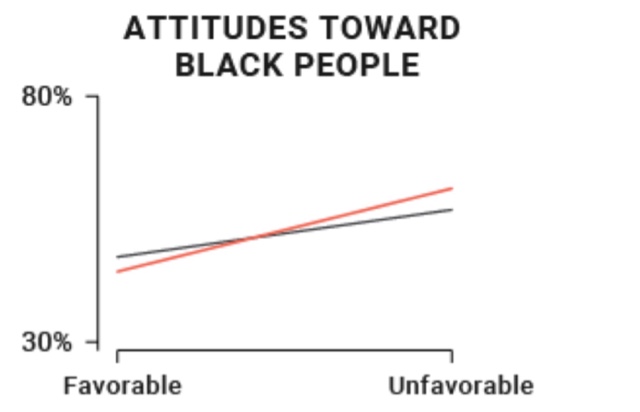 attitudes towards black people.  There more than anywhere is your racism, and while the issue did drive progressive voters to Clinton, it drove even more racist voters to Trump.
This is an unfortunate dynamic for the left.  What it appears to mean is, both progressives and conservatives were motivated by the “Black Lives Matter” movement and protests against police violence. But while the protests may have convinced some progressives, they drove EVEN MORE CONSERVATIVES to harden, and act on, their racial views.  In other words, in electoral terms the protest movement was actually COUNTERproductive.
Finally, here is the social issue (top left among the nine) which most drove voter behavior in 2016 compared with 2012: 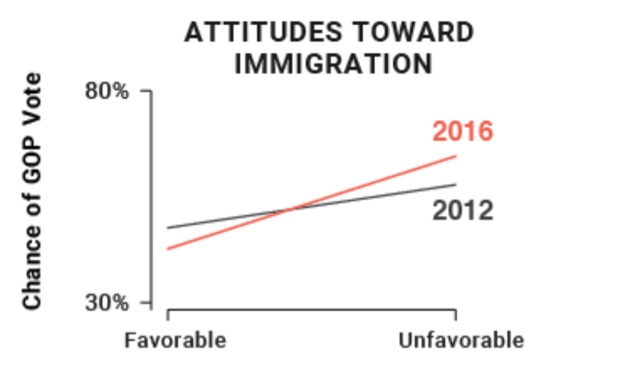 attitudes towards immigration. Note that, it too motivated both progressives and conservatives, and it too was more decisive in voting behavior on the right than on the left.
To get to the heart of the matter, it wasn’t racism per se which drove the electoral college victory to Trump. It was Xenophobia, and anger in particular directed at illegal aliens. While probably about half of the Muslim immigrants to the US come from countries in the Middle East and are white, many also are from places like south Asia and are not white. Yet feelings about Muslims barely moved the needle.
Further, if it were racism per se which was most dispositive, we would expect to see a bigger correlation with feelings towards black people than feelings towards immigrants. Not only was that not the case, but the *reverse* was true.
In an article only a week after the election, Loren Collingwood wrote in the Washington Post that:

I also found evidence consistent with the “racial threat” hypothesis. As shown by the orange dotted line in the graph, Trump’s vote was higher in counties where the number of Latinos has increased significantly since 2000. This suggests that some voters may have supported Trump as a way of expressing white identity in an increasingly diverse nation.

… Trump also did better in counties experiencing a loss in manufacturing since 2000. 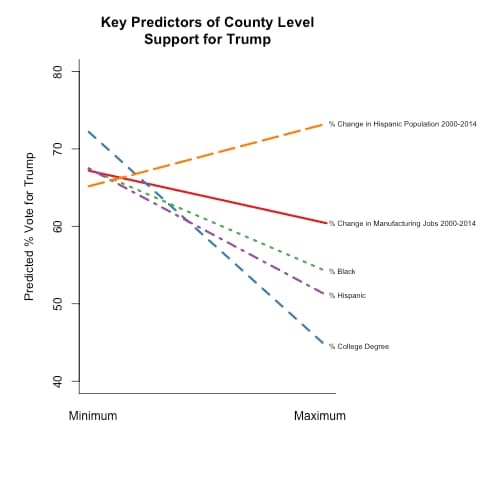 It’s worth noting that the unemployment rate among Latinos (I’m using men in the non-seasonal adjusted graph below) has declined further – from an admittedly higher peak –  in this expansion than that among whites:

At the height of the tech boom in 1999, male Latino unemployment was 1.3% higher than that of white males. In 2006 and again in June of this year, it was only 0.1% higher.
Since roughly 11 million, or 1/4 of the total Latino population, are illegals/undocumented workers, it is not difficult to imagine whites (and maybe some blacks) seething that illegals have taken some of their jobs, in a very long and still-incomplete recovery. Is that “economic anxiety” or racism or Xenophobia, or both?
And by the way, a similar dynamic about the volume and nature of immigation, by the way, appears to be behind the big decline in the center left Social Democratic parties of Europe.
Further, I wish I had kept the cite, but I recall reading stories of white working class voters who went to Trump rallies and participated in all of the chants, who supported him in part because they didn’t take his racial rhetoric seriously.  They treated it as all part of the show. The distinction is worth emphasizing — if I am a minority, I may not like a person who is willing to overlook that racial rhetoric, but it is different from a person who actually *agrees with* that racial rhetoric. More succinctly, if it comes down to whether you win or lose political power, you may be dead set against compromising with the latter, but what about the former?

I think there are three big lessons here for future elections: