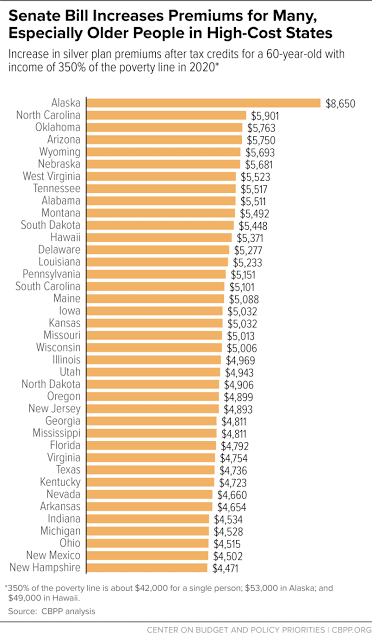 A sixty year old slightly above 350% FPL would face the loss of thousands of dollars in tax credits. Presently, the ACA covers up to 400% FPL and limits how much can be charged for age to 300%. The AHCA goes to 500% and reduces the subsidy coverage to 350% FPL. 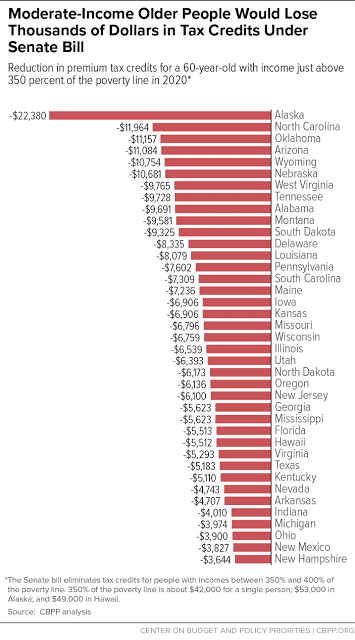 Senate AHCA eliminates subsidies (difference between total cost of the plan and a percentage of income) for those between 350% and 400% FPL resulting in $thousand of dollars in cost for those in the Individuals Market. Tax-credit subsidies would cover only 58 percent of health care costs, rather than 70 percent as under current law a decrease in actuarial value. People in higher healthcare cost states would have to pay more as depicted in the CBPP chart.

Under either Republican Plan, higher premiums and deductibles would force people into lower level plans covering less at greater cost. Why do this and incite anger amongst constituents when you can just keep on doing what you have done in the past and undermine the ACA with blocking the Risk Corridor program and cut deductible subsidies by killing the CSR? I believe McConnell is thinking along these lines and can shift the blame of the resulting ACA failure to Dems. Dems would take the blame as no one would understand how it came to be and little would be explained by the press.