Thank God it’s Boilerplate!: The Economist is lumping its labour

Thank God it’s Boilerplate!: It’s Thursday and The Economist is lumping its labour

The Economist and Jonathan Portes are at it again. “Lump of labor! Lump of labor!” The occasion? A proposal for a four-day workweek announced by the U.K. Green Party at their convention this week in Liverpool. 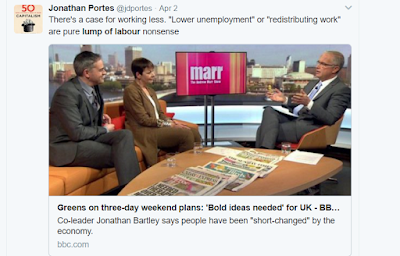 The Economist pretended to find “two problems” with the Greens’ proposal:

The Greens’ proposals encounter two problems. First, the theory. They argue that the reduced hours worked by some could be redistributed to others in order to lower underemployment. They thus fall prey to the “lump of labour fallacy”, the notion that there is a fixed amount of work to be done which can be shared out in different ways to create fewer or more jobs. In fact, if people worked fewer hours, demand would drop, and so fewer working hours would be on offer.

Second, the cost. Increased productivity could cover some of the costs of paying a five-day wage for a four-day week, suggests Sarah Lyall of the New Economics Foundation, a think-tank. She points to a Glasgow marketing company that did just that, and experienced a 30% leap in productivity. But that is an astonishing increase to expect across the board.

First the theory: why does the idea of redistributing work require a “fixed amount of work to be done”? I can cut up a pie in many different ways. I can also cut two, three, many pies in different ways. In what sense does redistribution imply a constant amount? It doesn’t.

The word “fixed” thus has a well-established place in partial equilibrium analysis. It refers to a proportional relationship between supply, demand and price. Thus a “fixed amount of work to be done” could conceivably refer to a variable quantity whose variation is regulated by the wage rate. This, of course, is the (partial equilibrium) argument trotted out perennially by opponents of the minimum wage. This is also the logic behind the argument that markets are self-adjusting and will clear, provided that prices are flexible.

It short, the lump-of-labor “fallacy” claim hinges on a deceptive ambiguity. It is a bamboozle. But apparently not enough of a bamboozle for The Economist, which doubled down with a second sleight of rhetorical hand, “the cost.” The Greens’ argument was that productivity could cover some of the cost. The New Economics Foundation cited an exemplary productivity gain of 30% at a Glasgow marketing company. The Economist harrumphed the whole argument away by sneering that it is “an astonishing increase to expect across the board.” 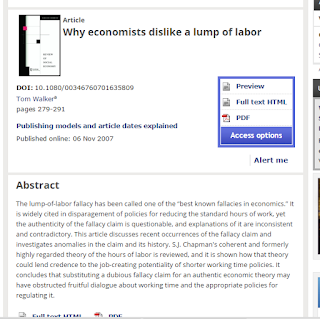