The long leading indicators: on the cusp of turning negative?

The long leading indicators: on the cusp of turning negative?

A “long leading indicator” is an economic metric that reliably turns a year or more before the onset of a recession.

Geoffrey Moore, who for decades published the Index of Leading Indicators, and in 1993 wrote  Leading Economic Indicators: New Approaches and Forecasting Records identified 4:

A variation of the above is Paul Kasriel’s “foolproof recession indicator,” which combines real money supply with the yield curve, i.e., the difference in the interest rate between short and long term  treasury bonds. This turns negative a year or more before the next recession about half of the time.

Another long leading indicator has been described by UCLA Prof. Edward E. Leamer who has written that “Housing IS the Business Cycle.”  In that article he identified real residential investments as a share of GDP as an indicator that typically turns at least 5 quarters before the onset of a recession

Several other series appear to have merit as long leading indicators as well.

Real retail sales in several forms also has value as a long leading indicator.  Doug Short has identified real retail sales per capita as another important metric.  In a similar vein, Steven Hansen of Econintersect has flagged retail employment vs. real retail sales as turning significantly in advance of recessions.

It also appears that the Fed’ Labor Market Conditions Index also turns negative serves as a long leading indicator, typically turning negative at least one year before the onset of a recession.

Finally, the tightening of credit conditions also appears to have merit as a long leading indicator.  Two measures, the Senior Loan Officer Survey, and the TED spread, are worth noting.

That gives us a total of 9 varieties of long leading indicators.  All of these economic series have a long term history of turning a year or more before a recession.

I haven’t examined these in detail since the beginning of July.  Then, I found them just slightly positive on balance.  In light of recent interest rate moves, now is a good time for an update.

With the sole exception of the 1981 “double-dip,” corporate bond yields have always made their most recent low over 1 year before the onset of the next recession.  Following Brexit, in the beginning of July  BAA corporate bonds yields made a new all-time low, and AAA bonds tied their all time low. Treasuries yields  also made new lows, but interestingly, mortgage rates did not. While that was a big positive, in the last week interest rates have moved near one year highs, as shown by the Bloomberg corporate bond index:

Treasuries also made new lows at the beginning of July, while significantly, mortgage rates didn’t:

On net, interest yields on bonds are still a positive, based on the new July lows.  But a further increase of about 0.20% in yields to a 12 month high would be enough to make them a negative going forward.

This is a complicated and changing  picture.  On the one hand, new single family home sales made a new post-recession high 2 months ago::

Like starts, single family permits have also been going sideways for a year, although they did eake out a new high, by 1,000, as just  revised for September UPDATE: They made yet another new high in October, as did starts:

UPDATE [Nov. 17]. Housing starts and permits for October were released this morning, and showed that both housig starts and single family permits made new post-rrecession highs.

And mortgage applications have not made a new high since June, and are on the verge of turning negative YoY (h/t Calculated  Risk). 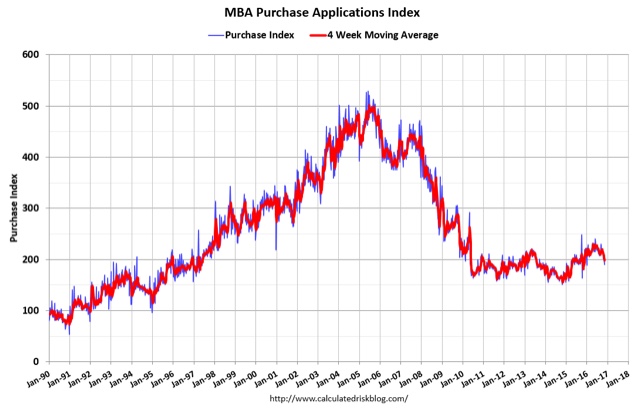 A major negative is that housing as a share of GDP has also declined in the last two quarters.

As a result, housing cannot reliably be scored a positive beyond Q2 of next year.  UPDATE: Octobr’s starts and permits data gives added confidence that housing is a positive through Q3 of next year.

The picture is mixed here a well.  Corporate profits last made a new high over a year ago, but it looks like the May have bottomed in Q4 of last year:

This cannot reliably be scored as either positive or negative.

No recession has ever started without at least real M1 or real M2, minus 2.5%, turning negative. Both have remained relentlessly positive.

This is an excellent long range forecasting tool in times of inflation.  Typically a recession begins after the Fed raises rates to combat inflation, sufficiently so that the yield curve inverts.  Much was made of its recent tightening, which nevertheless was very positive, and recently has reversed anyway:

The yield curve remains as positive even now, with the same slope as it had in the middle of the 1970s, 80s, and 90s expansioins.  The 5 year spread is even wider than it was during most of the 1960s.

I do want to caution that  the yield curve did not invert during the deflationary 1930s and low-flation 1940s, and several recessions happened anyway, so while I am including it, I suspect this is the long leading indicator most likely to signal falsely before the next recession.

In addition to money supply and interest rates, the loosening or tightening of credit appears to be an important component of changes in the economy over one year out.  Although it does not have a lengthy track record, the Senior Loan Officer Survey looks promising, as does whether or not the TED spread is in excess of 0.5% (inverted in the graph below):

Both of these are negative, the former for a year, and the latter for the last 3 months.

These peaked more than a year before the onset of the last two recessions.  Here’s what they look like throough September:

On the other hand, retail hiring has outpaced real retail sales for about a year, a negative:

So these are giving a mixed signal as well.

This is a recently compiled indedx of 19 indicators from the Fed.  This too typically turns negative at least one year before the onset of a recession:

It has been negative for most of this year, although in the most recent report, it turned up.  On balance, this remains a negative.