In my Weekly Indicators column on Saturday, I noted that the data had gotten a little darker.  Since I have been increasingly concerned about the direction of the economy over the next year or two, I thought I would spell out where my worry is coming from..

Let me start with the long leading data, and go from there.

First of all, while corporate bond yields made a new low after the Brexit vote, (blue in the graph below) mortgage rates did not follow (red):

Meanwhile,while  adjusted corporate profits have rebounded from their Q4 2015 low, they are still stalled below their previous highs:

Turning to the consumer side of the ledger, housing starts (blue in the graph below) did make – just barely – a new high several months ago, but basically have been stalled since the early part of 2015.  Meanwhile, motor vehilcle sales (red) (a shorter leading indicator) appear to have made their peak for the cycle one year ago:

Mortgage applications have not made a new high since June, and may go negative YoY by December: 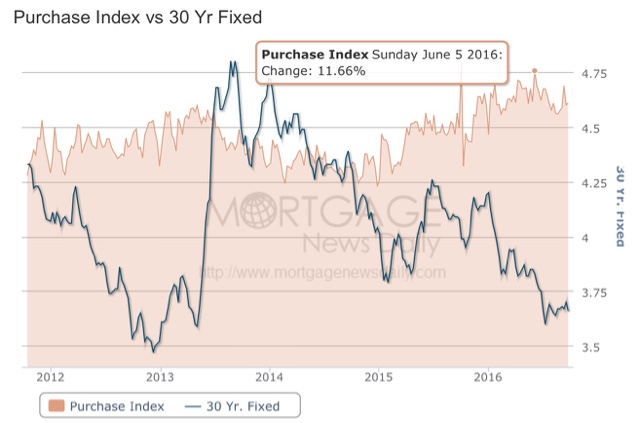 Which leaves real money supply the only one of Prof. Geoffrrey Moore’s original long leading indicators as unambiguously positive.  Further, according to the paradgm spelled out by Prof. Edward E. Leamer typically housing turns down first among consumer expenditures, followed by cars, followed by nondurable goods, before a recession hits.  Right now neither houses nor cars are really going anywhere — not down, but not up either.

Two other short leading indicators are no longer helping.

First, the price of gas is now only about 1% less than it was a year ago, and has been trending up, not down as per a typical autumn, since August:

Further, as industrial metals have weakened again, the US$ has also turned just a little higher:

Neither one of these are headwinds yet.  But if gas were to go back up to the $3.25 range next year or so, and the US$ strengthens, this would be very bad news.

Finally, when it comes to coincident indicators, industrial production is the first among equals, and while it bottomed in March, it hasn’t made a lot of progress since:

Worse, the progress it has made has chiefly been from natural resource extraction bouncing off the bottom (red in the graph below), while manufacturing, which made slow progress in 2015, has completely stalled this year (blue):

None of this is to say that we are presently in a recession, or even that one is imminent.  For example, the continual new lows in initial jobless claims are potent evidence that the jobs market is still in decent shape, and consumer spending continues to rise in real terms.

But put the above all together, and you have a more fragile expansion, with little in the way of new tailwinds to help it.  The one good thing that has happened in the last six months — the lows in interest rates — really need to start feeding through to a significant improvement in housing starts and permits.  I still think they will, because historically they have done so.  But if for any reason they don’t, then the economy can be tipped into contraction by not much of a negative shock.

If the economy were to tip into recession soon, my concern isn isn’t just academic.  This expansion has witnessed the poorest YoY wage growth of any expansion in over 60 years (red in the graph below), and as the unemployment rate risses during a recession, – and stays elevated for potentially several years afterward — YoY wage growth tends to fall by at least 2%:

Since our best YoY growth in wages to date is only  2.6%, that measns we are very vulenrable to outright wage deflation in the next recession, for the first time since 1938.

So, this month’s housing permits and starts report takes on added importance, as does the long leading indcator of coproate profits in the upcoming Q3 GDP report, as does the tightening (or not) of credit conditions for Q3 that will be reported in early November.