Tim Taylor has an interesting article about “What was different about housing this time?”  Specifically, why has housing in both building terms and as a share of GDP risen so slowly since 2009.

To cut to the chase, he writes that while prices have been increasing:

There are two possible categories of reasons for the very low level of residential building since 2009. On the supply side, it may not seem profitable to build, given what was already built back before 2008 and the lower prices. On the demand side, … the demand for housing is tied up with the rate of “household formation”–that is, the number of people who are starting new households…..  The level of household formation was low for years after 2009 ……..
Together, the declines in household formation and homeownership contributed to the decline in residential expenditures as a share of GDP.

As an initial matter, I again note that it is important not to overlook the surge in all-cash purchases of large houses by foreigners – who are hedging their bets and/or shielding financial assets – since 2009.

But what caught my eye was Taylor’s graph showing household formation: 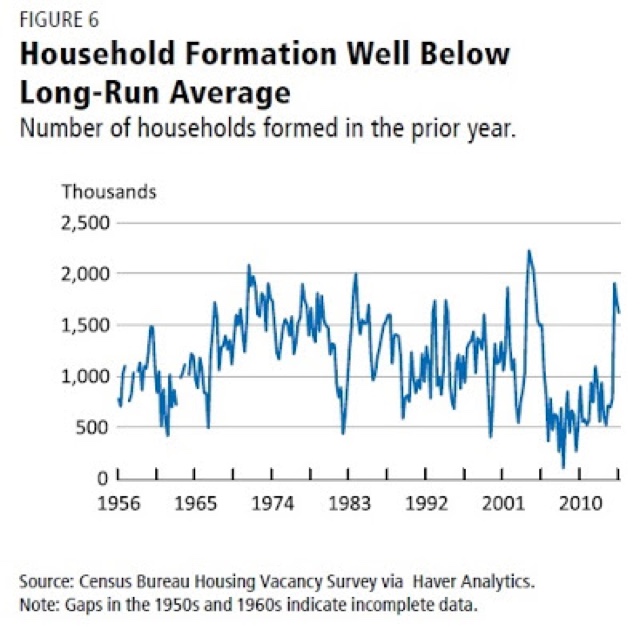 And now look at housing starts for the last 10 years: 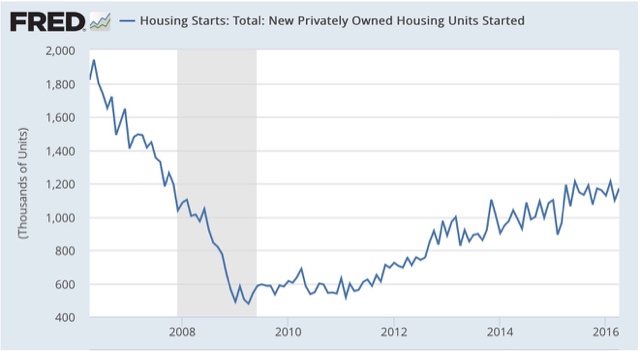 Household formation and housing starts tracked reasonably closely from 2009 through 2014, but the relationship completely broke down in 2015, with about 600,000 more households formed than new houses being built.

It strikes me that this may be an important part of the spike in median asking rents since the beginning of 2015:

To say that it is puzzling that home builders have not addressed this surge in demand for starter housing is an understatement.  It is probably one of the two biggest imbalances in the entire economy (along with stagnant wages vs. record profits).  This isn’t just an academic concern: increasing rents may have been vacuuming up nearly all of consumer gas savings for 1/3 of the populatioin.  and their impact on inflation may be leading the Fed to an important policy mistake which could bring on the next recession.