Aside from a shortage in starter housing for Millennials,there is NO inflation

Aside from a shortage in starter housing for Millennials,there is NO inflation

Inflation rose on the back of higher gas prices. Headline CPI gained 0.4 percent, although core rose a more modest 0.2 percent. Core CPI inflation is hovering just above 2 per cent….Fed hawks will be nervous that rising gas prices will quickly filter through to core inflation; doves will remind them that the Fed’s target is PCE inflation, which remains well below 2 percent.

As to his own opinion, he says:

I don’t think June is a go; the data isn’t quite there yet.

And here is Yian Mui of the Washington Post:

The solid [consumer inflation] data helps bolster the case for the Federal Reserve to raise binterest rates at its next meeting in June…..Fed officials have long said that they expect inflation to pick up once the effects of the stronger dollar and low oil prices dissipate. Although the central bank relies on separate data to calculate price increases, Wednesday’s report on consumer costs appears to support the central bank’s claim.

Whether or not the Fed is listening, the fact is that yesterday’s inflation data does no such thing.

Consumer prices less shelter are only up +0.1%. Not month owner month, but Year over Year! This is one of the lowest rates in the entire 75 year history of the series: 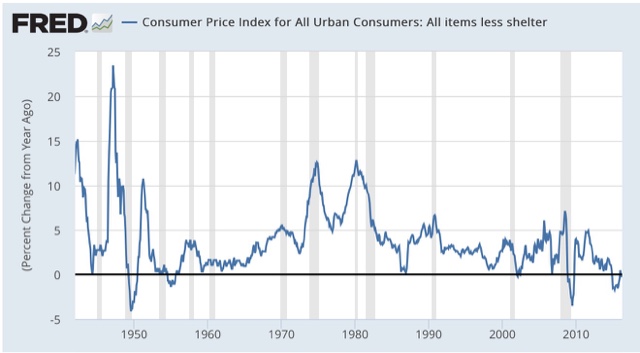 Here’s a close-up of the last two years just to drive home the point: 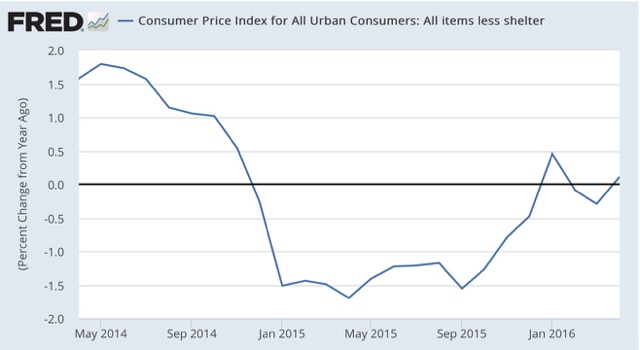 If housing really were “hot,” if people were buying houses with reckless abandon no matter what the price increase (like 12 years ago), yes there would be a basis for raising rates.  But that is not what is happening at all.

Despite the fact that there are now or will shortly be more Millennials age 18-35 than Boomers: 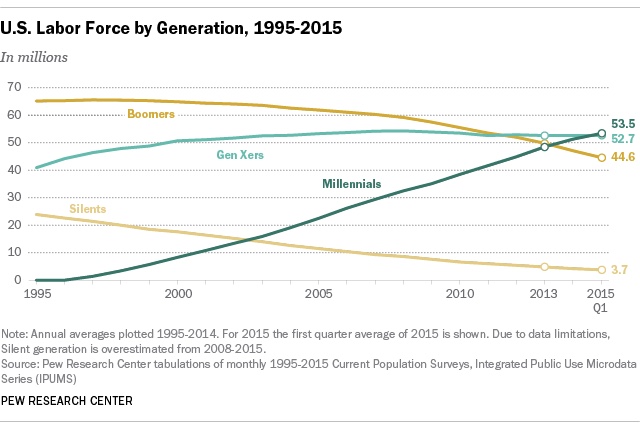 The entry level housing that they need (red in the graph below)  is not being built enough: 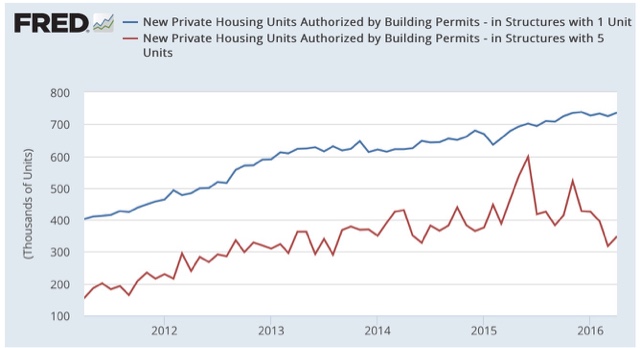 This is confirmed by the relative lack of housing inventory on the market: 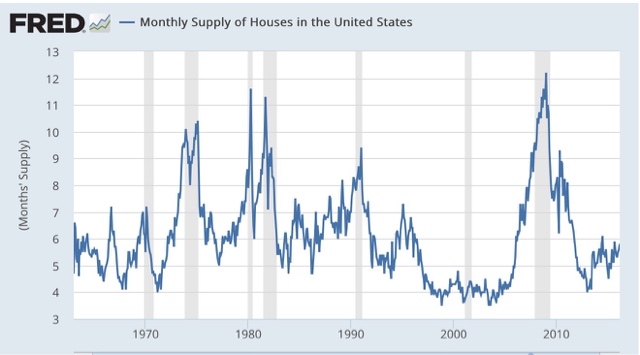 and the near record low vacancy rates for apartments:

and the soaring rents:

Since rental prices are up sharply due to low vacancies and a dearth of new entry level construction, there is simply no excuse for the Fed to raise rates. In fact, raising rates will only make the multi-unit housing shortage – and the spike in rents – more acute, as the below graph of YoY changes in the Fed funds rate (blue, inverted so that an increase shows as a downward move) compared with the YoY% changes in housing starts (red) shows: 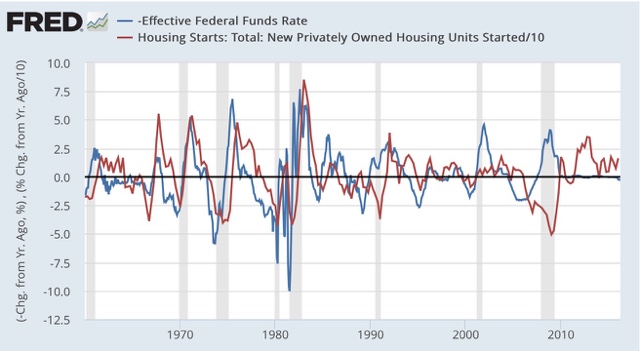 Quiite simply, an increase in interest rates has historically led to a decrease in housing construction:

Except for the housing supply shortage, there IS NO INFLATION.  One of the two most likely causes for the next recession will be if the Fed perversely raises interest rates despite these facts.

Update:  Here is one important reason for outsized median home price appreciation, and why builders find it more lucrative to focus on the high end market. Chinese all-cash buyers:

Chinese nationals have become the largest foreign buyers of US property after pouring billions into the market in search of safe offshore assets, according to a study.A huge surge in Chinese buying of both residential and commercial real estate last year took their five-year investment total to more than $110bn, according to the study from the Asia Society and Rosen Consulting Group.