In my opinion the best measure of how average Americans are doing in an economic expansion isn’t jobs, and it isn’t wages per hour.  Rather, it is real aggregate wage growth.  This is calculated as follows:

This tells us how much more money average Americans are taking home compared with the worst point in the last recession.

Why do I believe that this is the best measure of labor market progress?  Let me give you a few examples.

In each case, the economy creating more jobs, or more hourly employment, is inferior to the economy  that pays more in real wages to its workers,  In other words, the best measure of a labor market recovery is that economy which doles out the biggest increase in real aggregate wages. In short, at the end of the analysis, people generally work not for hours, and not for jobs themselves, but for the cold hard cash that is put in their pockets.  That’s why I believe that real aggregate wage growth is the best measure of a labor market recovery.

With that introduction, here are real aggregate wages for the entire past 50 years: 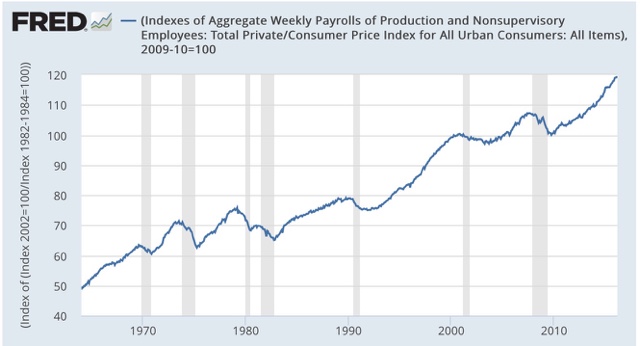 IMPORTANT NOTE:  This graph shows *aggregate* real wages.  It is not divided by households or per capita, so this measure doesn’t try to convey how much improved individuals’ lots might be.  It conveys how much more income has become available to the middle/working class as a whole.

For that, we can divide by population to see real wage growth per capita: 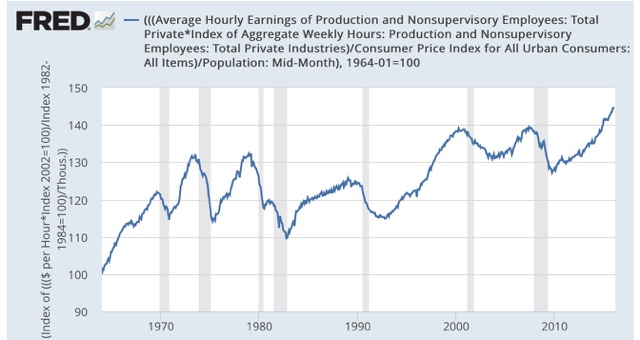 So how does the current expansion compare with past ones?  Here is the graph, normed to 100 at the post-recession bottom in real aggregate wages in October 2009: 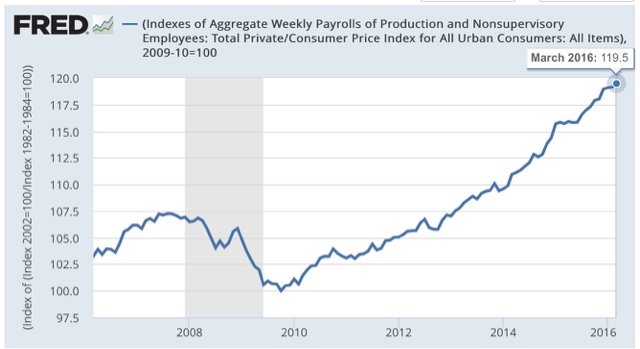 To compare, here is a chart I created last year showing the real aggregate wage growth in every economic expansion beginning with 1964: 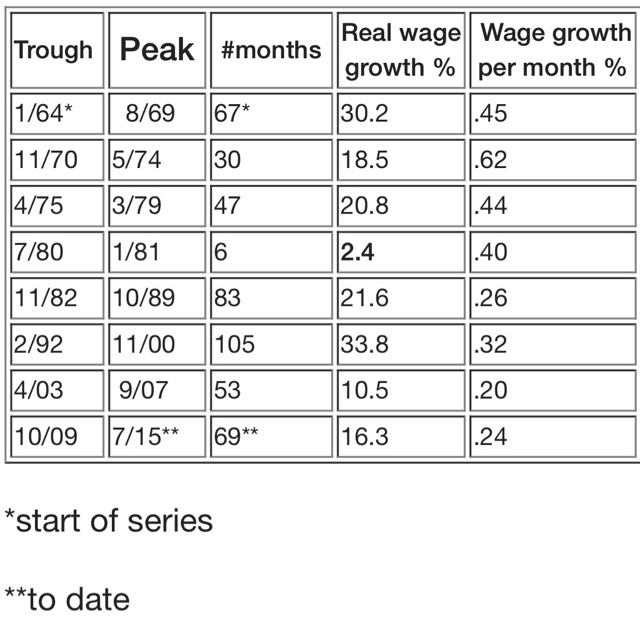 If you want to see the graphs for each expansion, just click here.

Because the above chart was created 8 months ago, the result for the current expansion has changed. Since the bottom 77  months ago, real aggregate wages have improved by 19.5%, an average of .25% per month. Four of the past 7 recoveries have been better.  Three were worse.  Wage growth per month is still anemic, although better than the George W. Bush expansion, .  This recovery has been helped by a big increase in the total number of additional hours worked.

Finally, here is how it compares with the much-vaunted labor recovery of St. Ronald Reagan: Currently the Obama labor market recovery has almost completely equaled the Reagan recovery 77 months in.  If there is continued improvement for the next 6-12 months, it is likely to surpass Reagan’s record.