Social Security Report: What is the “Low Cost Alternative” 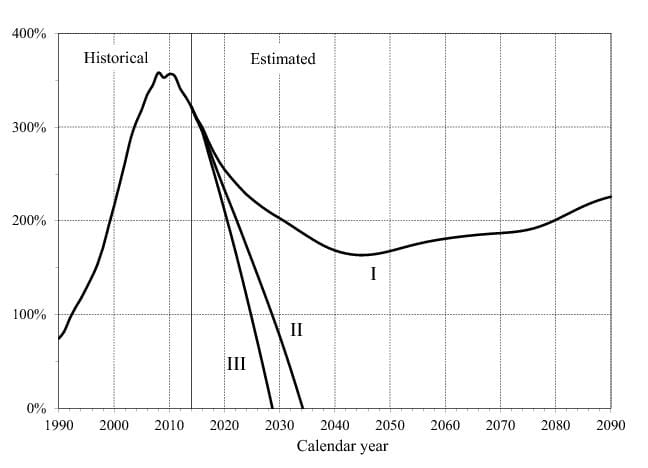 Well one answer it line I in the above figure from the 2015 Social Security Report.

Under the definitions used by the Social Security Actuary and Trustees the program is ‘Solvent’ over the short term if it never gets within 10 years of dipping under the 100% line in this figure, ‘Solvent’ over the long term if it never hits that 100% line in the 75 year actuarial window and ‘Sustainably solvent’ if the line is trending upwards as it leaves that window. Under this year’s Low Cost Alternative it would meet all those tests.

Now there are two ways to look at “Low Cost”. One is as a combination of economic and demographic numbers that are together riding the outer edge of the probability band. Which is to say a combination that if current policy remains unchanged will have maybe a 5% chance of occurring. From that perspective it is just Pie in the Sky optimism. The second though is to see its OUTCOME as a target and to use the various components of Low Cost to show us where to focus our attentions. For example if we hold demography steady would improvements in Real Wage Differential and Productivity move us closer to Solvency? Well we just need to inspect the relevant Table.

And the first order answer is “Yes, improvements in those two metrics improve solvency, move us closer to the desired outcome”. Now the second order answer might be “But the specific projections are still too optimistic, maybe we can move in the direction of Low Cost, but not get all the way there”. Which doesn’t mean just dismissing Low Cost, instead accepting that it gives us policy guideposts “Go THAT way!”. And why not? So what if the realm of the possible puts limits on our reach? If getting halfway to the goal via this path does good things for Social Security and good things for the economy at large why shouldn’t we use them as deliberate targets for active policy?

In future posts I will put us some specific projections of Low Cost and ask why they are out of reach. Note I will not be asking why the entire combination of projections is feasible. Because Low Cost is an artificial model that assumes that a lot of things break in a positive way, not all of which may be realistic. Which doesn’t subtract from the reality that if we can move 6 of 10 variable in that positive direction then positive effects are seen.