“In 2005 spending on home construction as a percentage of G.D.P. reached its highest level in more than 50 years. People who already own houses are treating them like A.T.M.’s, converting home equity into spending money: last year the personal savings rate fell below zero for the first time since 1933. And it’s a sign of our degraded fiscal state that the Bush administration actually boasted about a 2005 budget deficit of more than $300 billion, because it was a bit lower than the 2004 deficit.”

To add to Dr. Krugman’s comments: Residential investment was 6.1% of G.D.P. in 2005, the highest percentage since 1950. If residential investment falls back to the average for the ’70s, ’80s and ’90s of 4.5% that will be a drag on G.D.P. growth and reduce housing related employment. See: Housing Slowdown Threatens Inland Empire’s Economy 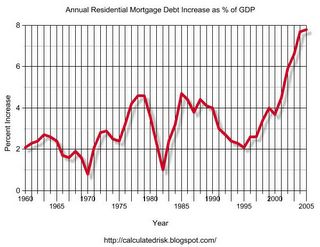 With regards to the “housing ATM”: Mortgage debt increased 7.7% in 2004 and an estimated 7.8% in 2005 – the highest percentage increases ever. Some of that additional debt was related to residential investment, but much of it was M.E.W. (Mortgage Equity Withdrawal) that helped drive personal consumption. With rising mortgage rates and flattening or even falling housing prices, M.E.W. will probably drop substantially in 2006.

“… it seems all too likely that America’s borrowing binge will end with a bang, not a whimper, that spending will suddenly drop off as both the bond market and the housing market experience rude awakenings. If that happens, the economic consequences will be ugly.”

And that is the question: will the debt binge end with a “bang” or a “whimper”. Will the US economy see slower growth or will it slide into a recession? Or will some new engine of economic growth emerge to replace the debt fueled growth of recent years.