UPDATE: Gallup reports: Many States Shift Democratic During 2005. For a map of the Gallup results, see my post: America Turning Blue.

According to the American Research Group, Bush’s approval rating “Returns to Record Low“:

George W. Bush’s overall job approval rating has returned to its lowest point in Bush’s presidency as Americans again turn less optimistic about the national economy according to the latest survey from the American Research Group. Among all Americans, 36% approve of the way Bush is handling his job as president and 58% disapprove. When it comes to Bush’s handling of the economy, 34% approve and 60% disapprove. 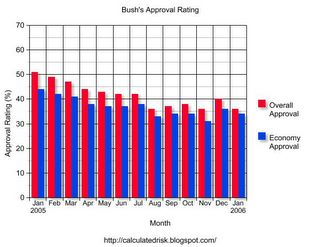 With 2 million jobs added in 2005 and solid GDP growth, why are so many Americans pessimistic about the economy? Are Americans feeling less financially secure, possibly because of the record levels of debt and debt service? As the WaPo reported this morning: As U.S. Economy Has Thrived, So Has Debt

· U.S. household debt hit a record $11.4 trillion in last year’s third quarter, which ended Sept. 30, after shooting up at the fastest rate since 1985, according to Fed data.

· U.S. households spent a record 13.75 percent of their after-tax, or disposable, income on servicing their debts in the third quarter, the Fed reported.

· The trade deficit for last year is estimated to have swollen to another record high, above $700 billion, increasing America’s indebtedness to foreigners.

Or does this poll reflect other worries, like the ongoing disaster in Iraq, the possible constitutional crisis and the GOP’s “culture of corruption”?

Personally, given Bush’s track record, I’m surprised 36% of Americans still approve of the way Bush is handling his job as president.