How can the US aspire to an “Ownership Society”, when in reality the nation is mortgaging its future, or in the words of Warren Buffett, becoming a “Sharecropper’s Society.”? And how can the US revel in slightly above trend GDP growth that comes at the expense of massive quantities of new consumer and government debt?

This week the Bureau of Economic Analysis reported the Current Account Deficit (CAD) for the 2nd quarter. Seasonally adjusted the CAD was only $195.7 Billion, but on a Not Seasonally Adjusted basis, the deficit was another new record (see first graph): 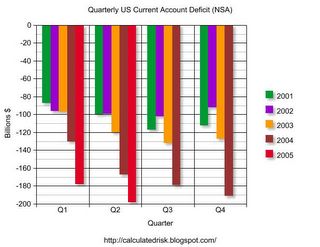 For the year, Dr. Setser projects the current account deficit at $820 Billion. Based on the first two quarters and the current trend that estimate seems very reasonable. The following graph shows the CAD as a percent of GDP (2005 estimated): 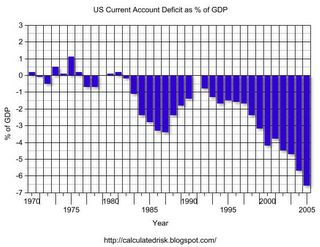 This imbalance is a growing concern for the world economy. Dr. Setser expresses his concern that “… financing [the deficit] may be a bit more difficult in 2006 than in 2005”. It might be time to discuss the possibilities of a soft landing again. I think a hard landing is becoming ever more likely.

NOTE: Congratulations to Brad Setser on one year of blogging!

But the “Debtor Society” is more than just debt to foreigners: the US Government continues to pile up debt at a record pace and US consumers are following suit. The National Debt has increased $539 Billion so far this fiscal year; essentially the same rate as last year despite the claims of “deficit reduction” from the Bush Administration.

And for consumers, the FED’s Flow of Funds report will be released on Wednesday for the 2nd quarter. The report will probably show significant quantities of new consumer debt, especially mortgage debt as the housing boom continued.

The “Ownership Society”? I think “Debtor Society” is more appropriate.

P.S. For thoughts on Tuesday’s FOMC decision check out Dr. Duy’s Fed Watch: What Will Be the Fed’s Message? and Dr. Polley’s Picking up the (measured) pace?.