According to the Lundberg Survey gas prices set another nominal record last week averaging $2.50 per gallon nationwide for self-serve regular. In real terms (adjusted for inflation) gas prices are still below the record set in the early ’80s. Chart from the NY Times. 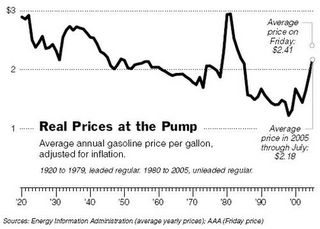 The above chart is accurate but perhaps misleading. For the most part, the US economy has reduced its dependence on oil over the last 25 years. The following chart shows total petroleum consumption and petroleum imports as a % of GDP. Even if gas prices reach $3 per gallon, the US total petroleum consumption will only be about 4% of GDP compared to almost 6% in 1981. (Note: 2005 is an estimate assuming sustained current oil prices). 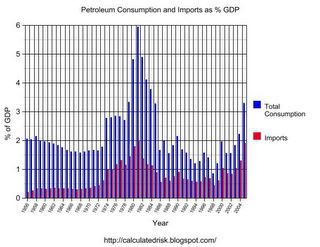 The oil shocks of ’73 and ’79 that preceded severe recessions are clearly visible. Also some economists have argued that the small increases in ’90 and ’00 played a role in the mild recessions that followed. Muellbauer and Nunziata even predicted the U.S. recession of 2001 partly based on oil prices.

Given the recent run up in oil prices, is a recession likely? Back in April, I wrote “I think a sustained contract price of over $50 (or WTI price close to $60) would probably trigger a consumer recession in the US.” I based that prediction on three points:

3) Reducing consumption is more difficult now than in the ’70s and early ’80s because a larger percentage of oil products are used for transportation – the most resistant users. (see next graph). 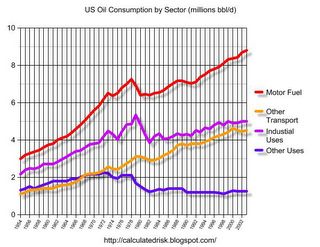 It is possible that a much higher price would be required to trigger a recession. One explanation is this is a demand driven price shock and when demand starts to slacken, oil prices will fall. That is very possible.

“… it remains a distinct possibility that it is events associated with the military conflicts themselves, rather than the specific changes in oil prices, that leads the economy into recession. The wars may lead to anxiety about future energy prices and availability or have other psychological effects whose consequences for consumer spending or conduct of monetary policy are as important or more important than the movements in oil prices themselves.”

My view (not Angry Bear) is a combination of a housing slowdown and high energy prices will probably lead to an economic slowdown next year, and possibly a recession.

Of this I’m certain: I experience a price shock every time I fill up my tank!