Interesting there is not a peep on this in the US and literally hundreds of thousands of women gathered in the streets of the Swiss cities. 40,000 in front of parliament in Bern and the same was repeated in the cities of Lausanne, Geneva, and other places. It is said the turnout is greater in numbers than the protest in 1991. Much of the same inequalities are recognized in Switzerland as they are in the US. Women lose is salary if they take time off. This is not only in gross income, it is in hourly, weekly, or month income when compared to equivalent paid time period. 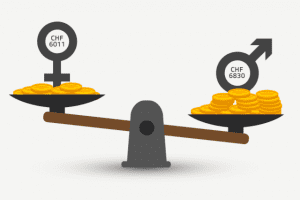 However in Switzerland, there is a movement afoot to again equalize the differences experienced between genders which has been written into the Swiss constitution. In Switzerland, equal rights for women and men were enshrined in the Federal Constitution by voters on June 14, 1991. 40 years after the popular vote to make it a part of the constitution, the goal of equality has yet to be achieved.

– Lack of wage (median gross) equality with women making 12% less than men. The difference was even greater with women earning 14.6% less than their male colleagues which could not be explained by education, years of service, or role in the company.
– The majority of men work full time while only 41% of women do. Much of this is explained by the difference in out of home and at home workloads which men are impacted less in their careers.
– The division of housework in couple’s households remains the same. Women choose part-time work to care for children followed by other family responsibilities. Men working part time are pursuing an apprenticeship, a course of study, or are simply not interested in full-time work. This difference is reflected in the unequal distribution of domestic work of which women do the bulk.
– Due to working less paid hours, women get less from the Old-age and Survivors Insurance as well as the Occupational Pension fund. provision.
– Women in City, Canton, and Federal government are underrepresented.

In a country where even a labor strike action is rare, women have been concerned about neglecting their jobs and workplaces. To adjust for the time off, women demonstrators have decided they will finish their work day at 15.24 on Friday afternoon a time chosen to reflect the differences in pay for the same or a similar job done by men. The 15:24 reflects the almost 20% wage disparity with men. Many women and men in support of the movement are wearing fuchsia purple clothing on Friday the symbolic color chosen to reflect the event.

The strike has been covered in foreign media such as the Financial Times and on the BBC. There was also support from the United Nations.