February monthly data started out this morning with the ISM manufacturing report. The index, especially its new orders subindex, is an important short leading indicator for the production sector.

In February the index rose from 57.6 to 58.6, as did the more leading new orders subindex, which rose from 57.9 to 61.7. Since the breakeven point between expansion and contraction is 50,  these are both very strong numbers – as they have been for most of the past 18 months: 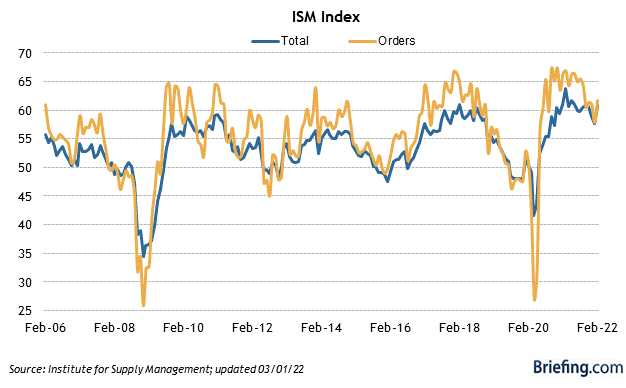 This forecasts a strong production side of the economy through summer.

The second release that typically begins the month, construction spending for two months ago (January), rose 1.3% in nominal terms for overall spending including all types of construction, while the leading residential sector also rose 1.3%. Nominally, both made new all-time highs:

Real residential construction spending does not appear to be at a recession level decline at this point. If mortgage rates continue to be higher than 4%, this could well change in the next few months.