On the retirement of Justice Breyer: is this any way to run a country?

On the retirement of Justice Breyer: is this any way to run a country?

Long long ago I remember reading that Justices William Brennan and Thurgood Marshall, both about 70 years old at the time, decided not to retire during the Presidency of Jimmy Carter, because he was not liberal enough, preferring to wait for the next, more left-wing Democratic President. Heh!

Liberals got lucky when, upon Brennan’s retirement in 1990, David Souter was named to replace him. They weren’t lucky when Marshall retired due to badly declining health in 1991 and was replaced by Clarence Thomas. Marshall died only 4 days after Bill Clinton became President; and Thomas, the first GOP Justice selected explicitly for his young age at the time (he was only 43 years old when confirmed to the Supreme Court) still sits upon the Court over 30 years later.

Of course, that same scenario played out less than two years ago when Justice Ruth Bader Ginsburg, having refused to retire during Obama’s Presidency (allegedly even after a direct appeal from Obama in 2013 when he correctly feared losing the Senate in 2014), died and was immediately replaced by the 48 year old Justice Amy Barrett.

A few years ago I calculated that, during the 19th Century, the median tenure for a Supreme Court Justice was 14 years. With immense gains in longevity during the late 20th Century, and the explicit practice of selecting young candidates in their 40s in order to maximize their partisan impact with lifetime appointments, since 1950 that median had increased to 20 years; and I calculated that by 2018, it would be 30 years.

The New York Times, writing two years after me, discussed the same phenomenon and included the following helpful graph: 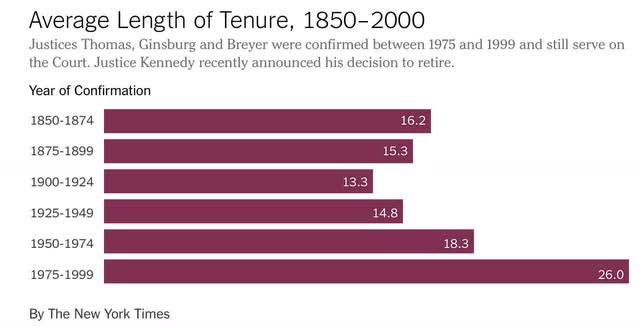 Further, as I wrote several months ago, the anti-Federalist Brutus correctly predicted that Supreme Court Justices, once they realized that their power was almost completely unchecked under the Constitution, would enact their partisan preferences into Supreme Law. As we watch a radically reactionary majority on the Court systematically dismantle the 20th Century, there are deeper questions to be asked than just focusing on the current personnel.

Namely, since the US Constitution enshrines judicial supremacy: is this any way to run a country? Why should the whims and egos of 9 individuals, deciding whether and when they want to retire, or whether they intend to serve until they drop dead, absolutely determine the rights and obligations of over 300 million people; and the fundamental structure of the government that shapes those rights and obligations?

Simply, had Brennan and Marshall retired during Jimmy Carter’s Presidency, or had Ginsburg resigned during Obama’s, the fundamental supreme law of the United States would be drastically different than it is now (and even more so than it is likely to be in a couple of years). Why on earth should that be the case? Why should the idiosyncrasies of a few philosopher-kings and queens absolutely govern our lives?
Over the years my position on the Supreme Court has become more radicalized. It has changed from the need to convince elderly Justices like Breyer to retire, to the more fundamental position that we should not have to engage – sometimes futilely, viz., Ginsburg – in this persuasion.

Even if the size of the Court were expanded now, that would only cause the GOP to expand it further when they returned to power, leading to a further expansion by Democrats later, etc. For the good of the Republic, the very structure of the Court must be reformed.

First and foremost, that means term limits. With 9 Justices, one Justice’s position should expire every 2 years (essentially, an 18 year term). After serving on the Court, to fulfill a lifetime appointment, they should continue to serve as “Justices emeritus” on one of the regional Courts of Appeal.

Beyond that, there is the problem that the Court is not “overtly” a political branch. They are a bunch of lawyers who are not required to have any political sense. In other words, they can be utterly tin-eared. In 1857, believing that they were settling the slavery issue permanently, Chief Justice Roger Taney and a majority of the Court essentially ruled that slavery must be permitted everywhere. It was a decisive turning point igniting the fuse that led to the Civil War, and 700,000 deaths, less than 4 years later. When the Court overturns abortion rights a few months from now, I suspect the reaction by the clear majority of Americans who vehemently disagree will be on par with the reaction of the North to Dred Scott. Say what you will about politicians, they are sufficiently calculating that they collectively have a sense of how far they can go without provoking a violent counter-reaction. No such political sense restrains the Philosopher Kings and Queens on the Supreme Court.

When such tin-eared opinions are issued, there needs to be a mechanism to temper them without the need to have 2/3’s of both Houses of Congress and 3/4’s of all States approve first. For example, Canada’s Constitution has a “Notwithstanding” clause that permits provinces to overrule their Supreme Court. Allowing the Congress and the Presidency to stay a majority opinion of less than 2/3’s of the Court at least long enough for the next Congressional and Senate elections to determine whether or not to accept the ruling – or at least some similar check on the Court – is needed.