In his recent book “Kill Switch,” Adam Jentleson, a former aide to the late Senator Harry Reid, persuasively argues that the Senate filibuster arose by accident when a rule revision in 1805 failed to include the “previous question” resolution, which would require a vote on the issue pending because it was thought superfluous. He also shows by overwhelming evidence that for the past 200 years, by far the single most common use of the filibuster was to defeat civil rights legislation benefiting Blacks.

And in the past week, it has become apparent that Senators Manchin and Sinema would join GOPers to uphold a filibuster against voting rights legislation once again.

This brings me to a couple of recent graphs posted by Kevin Drum. He is the sort of commentator I read, even though I frequently disagree with him, because his arguments are worthy of thinking through, and sometimes he finds genuine gold nuggets.

An example of the former is when he argues,  as he did today, that “the progressive wing of the party [“blew it” by] insist[ing] on pushing voting rights laws that had zero chance of passing. Biden knew this from the start and said so. Then Bernie Sanders insisted on an insane BBB bill that would have been unprecedented in the history of the country,” and as a result is responsible for “Joe Biden’s disastrous approval rating and the chaotic shape of the Democratic Party.”

I am trying to think of the counterfactual situation where the progressive wing of the Democratic Party simply allowed the infrastructure bill to pass and then sat back somnolently while nothing else happened. Somehow I fail to see that Joe Biden’s approval rating would be any better. Hmmmm . . . I rather think that, whether they articulate this blame or not, the public is really pissed off at being governed by John Roberts’ reactionary 6 on the Supreme Court, with an assist by co-Presidents Manchin and Sinema, and that the attempt by progressives to get more done has not worsened this perception.

But, as an example of the latter, Drum has shown very persuasive data many times showing that the decline in the crime rate since the early 1990s correlates really well with the abatement of lead paint beginning 20 years before. Less lead poisoning in boys leads to less crime in young men 20 years later. Q.E.D. And it really does seem to be true.

Anyway, that brings me to the point of today’s post. Because recently Drum has also been arguing that the main source of the US’s turn to proto-fascism has overwhelmingly been Fox News (much moreso than even Facebook). Below are a couple of graphs he has posted over the past several months to that point.

First, commitment to democracy in the US by political party: 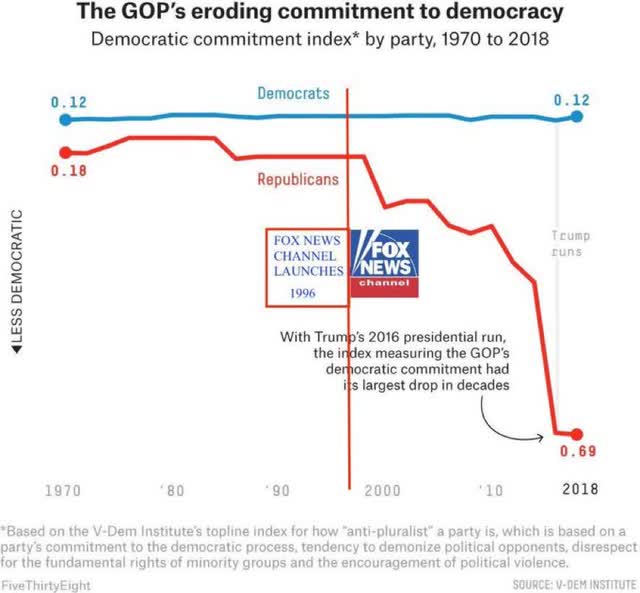 Second, anger or dissatisfaction with the direction of the country in the United States: 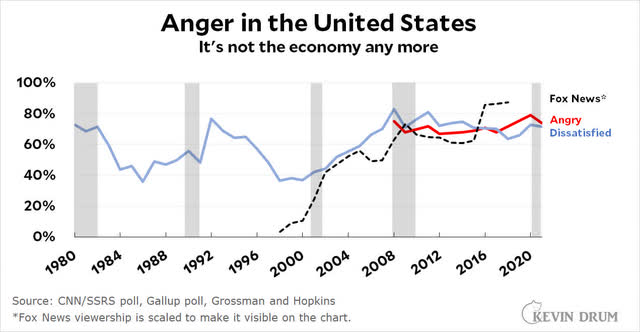 While correlation is not causation, it is certainly true that Fox News’s almost entire worldview of white grievance overlays quite well with both the collapse of commitment to democratic institutions by GOPers and anger at the direction of the country.