Whither the winter wave, and the trajectory of endemic COVID

Coronavirus dashboard for October 27: whither the winter wave, and the trajectory of endemic COVID

Well, we got some definite good news yesterday in the FDA approval of vaccines for children ages 5-11. Probably about 1/2 of the 8.5 million children in this age group will be vaccinated by the middle of winter.
In the meantime, here is an update on the current status.

The Delta wave, which rolled in like a tsunami, continues to roll out like a tsunami as well. New cases are down almost 60% from their peak (at a still awful 67,000), while deaths, after some noise from data dumps, are down under 1500: 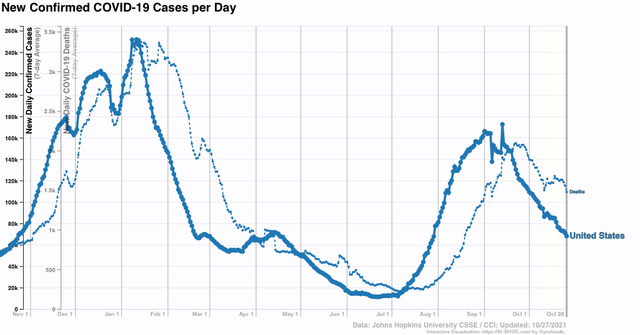 Since deaths follow cases with roughly a 3-week lag or so, the current decline in cases suggests a decline in deaths below 1000/day in about 3 weeks.

Here is what the trajectory of the Delta wave looks like regionally: 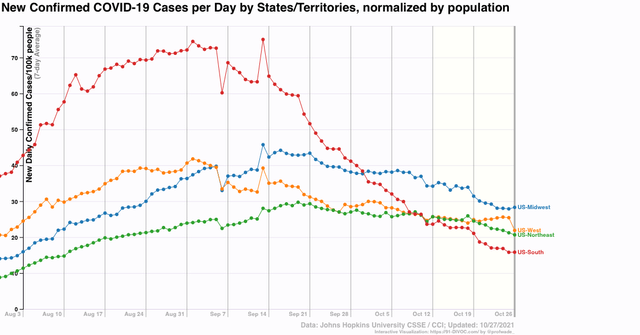 Last year the winter wave began by October 1, as case counts of roughly 20,000 per day doubled to about 40,000 per day during the month. By contrast, this October cases have continued to decline and are now lower YoY.
But we *may* be beginning to see this year’s winter outbreak, as cases in the Mountain States plus South Dakota are on an uptrend again, after about a week where *no* States were in an uptrend: 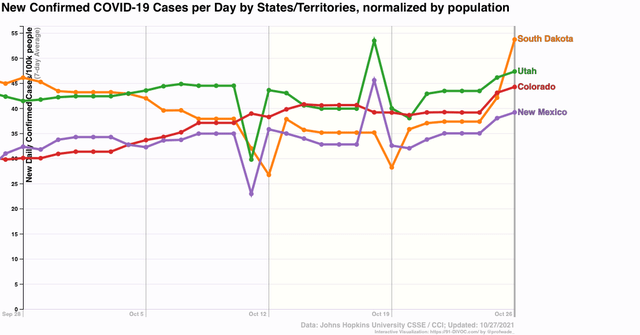 This could be just noise at this point, but it bears watching.

Finally, over the weekend I wrote that I expected waves from here on in to decline by about 1/3 to 1/2 of each prior wave, due to an increased % of vaccinated people, plus and increased % of those previously infected.

As part of the FDA approval for children, we got a very useful update on seroprevalence, i.e., what % of the population has been infected, whether “confirmed” or not.  Via CNN, here is what Dr. Fiona Havers, a viral disease specialist with the CDC, said:

The seroprevalence of Covid-19 antibodies among children ages 5 to 11 appeared to increase from about 13% in November to December last year to 42% in May to June of this year, according to data that Havers presented to the VRBPAC members Tuesday.

“Investigators also use seroprevalence to estimate the cumulative number of infections and compare that with the number of reported cases by age. Overall, for the general population, the jurisdiction-level infections-to-case ratio had a median of 2.4, with a range of 2.0 to 3.9,” Havers said.

“For children, the infections-to-case ratio was substantially higher, with a median of 6.2 cases per every one infection, with a range of 4.7 to 8.9,” Havers said. “These seroprevalence data suggest that infections in children are less likely to be reported compared with adults. But children are at least as likely as adults to be infected with SARS-CoV-2.”
That is is an important reason why I think any winter wave will not be as bad as either Delta or last winter. This is a way of introducing today’s final graph, showing those fully and partially vaccinated, plus the total # of infections: 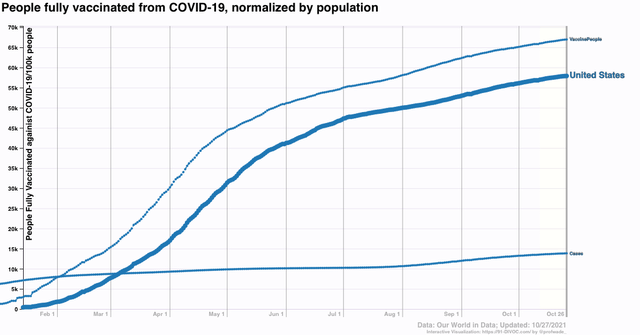 As of today, 67% of the entire US population has received at least one shot, and 58% have been fully vaccinated. About 14% have had *confirmed* infections. If the real number of infections is 2.4x that %, that amounts to about 34% of the total population having been infected.

6% one shot but never infected11% (1/3rd of the unvaccinated) previously infected equals 17% with some resistance
That leaves only 22% of the population as sitting ducks, right now.

This is going to improve not only due to vaccinations among those 5-11, but also employer and school mandates, and a slow creep of those begrudgingly getting their shots.

This is why I expect any winter wave this year to be only 1/2 to 2/3’s of the peak of the Delta wave, or last winter’s wave, and as more unvaccinated people get infected, as well as more people ever so slowly get vaccinated, those subsequent wave peaks are going to continue to decline in intensity going forward.