Another strong month for real retail sales growth; to cope, employers are going to have to sweeten the pot to add employees

Real retail sales, perhaps my favorite monthly economic indicator since they tell us so much about average consumer behavior, and are also a good short leading indicator for jobs, were reported this morning for September, and they were positive.

They are also 8.1% higher YoY, and 3.8% higher just since January, as will be discussed further below.

Last month I wrote that ”while the recent decline from April is consistent with a slowing economy ahead, if sales stabilize here I don’t see this as a harbinger of an actual downturn.” That still looks correct. To show why, let me overlay industrial production (gold, right scale) with real retail sales in the graph below:

Industrial production is only 0.3% higher than it was in February 2020 just before the pandemic. In other words, manufacturers have not ramped up production equivalent to the increase in sales at all. The only time the economy gets in real trouble is when production has substantially outpaced sales (as at the end of the 1990s and mid-2000s, not coincidentally shortly before recessions began). Production and imports are still trying to catch up to this very strong increase in consumer sales, which is why we have such huge bottlenecks at all of our ports and rail and truck shipping as well. As noted above, real retail sales are over 8% higher YoY.

How extreme is that? Well, here’s a graph that subtracts 8% YoY growth from retail sales from 1948 through 2019:

With the exception of 2 months during the 1990s, real retail sales haven’t been this strong YoY since 1984. The modern global supply chain simply can’t cope with that huge increase to new all-time levels.

Now let’s turn to employment. As I have written many times over the past 10+ years, real retail sales YoY/2 has a good record of leading jobs YoY with a lead time of about 3 to 6 months. That’s because demand for goods and services leads to the need to hire employees to fill that demand.  The exceptions have been right after the 2001 and 2008 recessions, when it took jobs longer to catch up, as shown in the graph below, which takes us up to February 2020:

Now here is the same graph since just before the onset of the pandemic. Note the scale is much larger, given the huge changes wrought by the early lockdowns, and of course the comparative spikes from the data one year later:

As with the recoveries immediately after the two prior recessions, up until the past several month’s YoY job creation has been well below YoY real retail sales growth. But for the last 3 months, jobs have caught up to forecast trend.

Although the most recent jobs report was, relatively speaking, disappointing, this still argues that we can expect jobs reports in the next few months to average out about even with those from one year ago, which averaged about 500,000 per month. Before I go, let me supply one more graph from my former co-blogger Invictus: 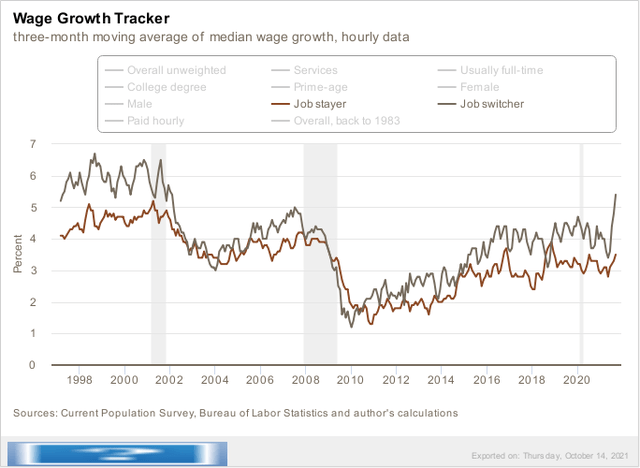 Job switchers have seen explosive growth in their wages in the past few months. To cope with labor’s newfound great strength, employers are going to have to engage in lots of wage and lifestyle sweeteners to maintain the 500,000/month jobs growth they need.