The market still out of equilibrium, no additional hiring from early termination of benefits

This morning’s JOLTS report for July is particularly important, because July was the first full month after a number of GOP-controlled States terminated enhanced unemployment benefits, on the theory that they were excessive and were coddling idle workers. Thus we should be seeing a big drop in unfilled job openings, as those people were incentivized to rush out and accept new employment.

Here are the month over month percentage changes for each of those metrics:

Voluntary quits also rose, and are higher than any other prior month except this past April, as to which they were only 15,000 lower:

The record number of people voluntarily quitting their jobs (meaning they are not eligible for unemployment benefits) is testimony to the record robustness of the jobs market, and is even more impressive given the cutoff of emergency benefits by many States.

Meanwhile, layoffs and discharges (violet, right scale) rose by 105,000 from their record low levels of May and June, while total separations (light blue, left scale) rose by about 150,000 to a level that was typical for late in the last two expansions:

This is a market that continues to be out of equilibrium and is searching for a new one, as hires are well-above typical rates in the last two expansions for the second month in a row.

To return to the issue of job openings, here is this month’s update of a graph by Wolf Richter, showing that continued unemployment claims have declined in the aggregate in States that have cut off pandemic unemployment benefits vs. those that retained them: 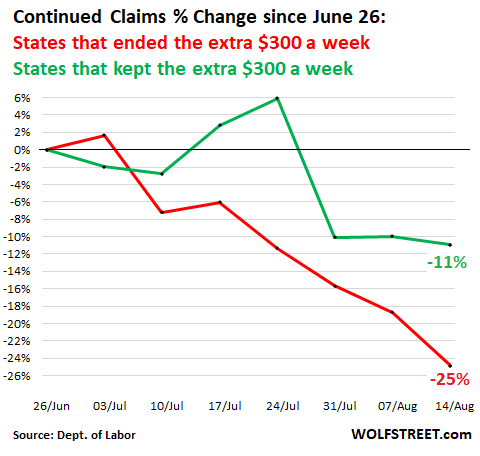 But here is another, showing that there has been no enhanced level of actual new hiring in those States that terminated emergency benefits early vs. those that didn’t: 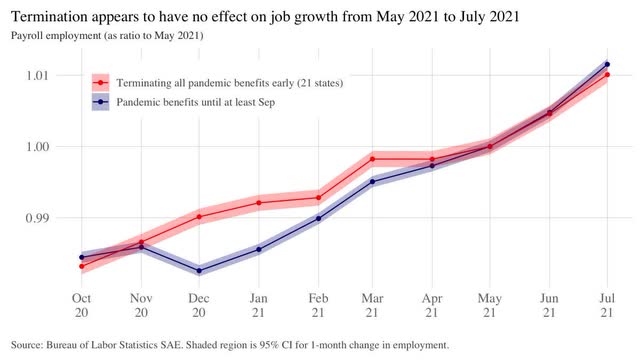 n other words, the termination of benefits was effective in reducing the unemployment compensation rolls, but apparently not effective at all in actually generating new employment. That job openings have only increased since those States terminated benefits suggests that other factors, such as the inability to find child care, or concerns about the safety of jobs on offer, are essential factors.

A great deal continues to depend on the course of the Delta wave, and in particular whether the wave is peaking right now and will sharply recede, or simply migrate north with the colder weather (thus increased indoor gatherings in those areas). A new equilibrium in the jobs market will be reached a lot sooner in the former case than in the latter.

Tags: hiring Comments Off on The market still out of equilibrium, no additional hiring from early termination of benefits | Digg Facebook Twitter |