Coronavirus dashboard for August 25: is the Delta wave close to peaking?

Coronavirus dashboard for August 25: is the Delta wave close to peaking?

I’ve been writing for about a month that, if the US outbreak followed the cycle of India and the UK, in which the Delta wave hit its peak about 6 to 8 weeks after onset, in the US the peak would be about Labor Day. As the graph below (which is in log scale better to show accelerating and decelerating trends) shows, it looks like that is about to happen: 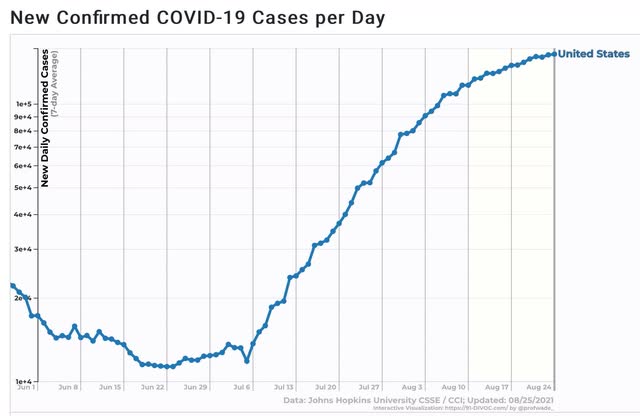 That the Delta wave may be approaching its peak by noting in how many States it has already done so, or is very close to doing so. A couple of weeks ago I noted that was the case with the 4 or 5 earliest States to be hit. Now there are 8 States + DC which are down week over week, or at least clearly down from their prior peak: 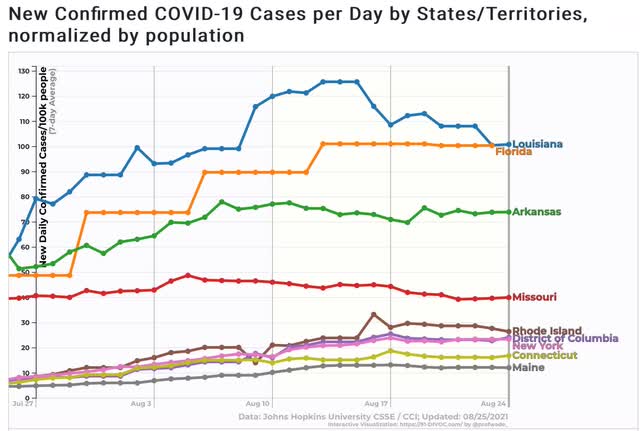 Additionally, there are 9 other States that appear very close to doing so: 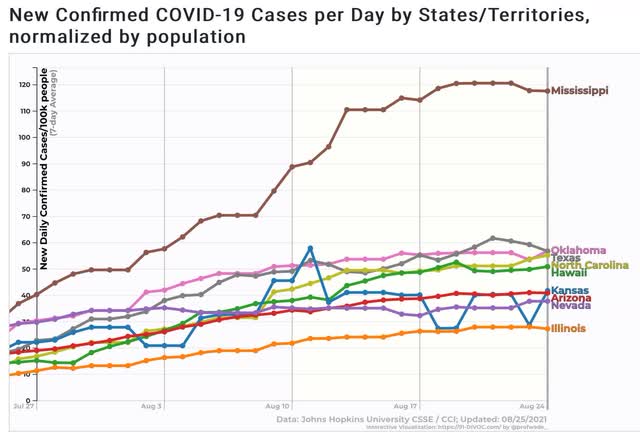 Note that 3 of the 4 biggest States – NY, TX, and FL – are on this list, plus IL. Among the largest States, only CA is still in an unabashed uptrend.

Deaths, which have been following cases by 3 to 4 weeks, are still in a pronounced uptrend: 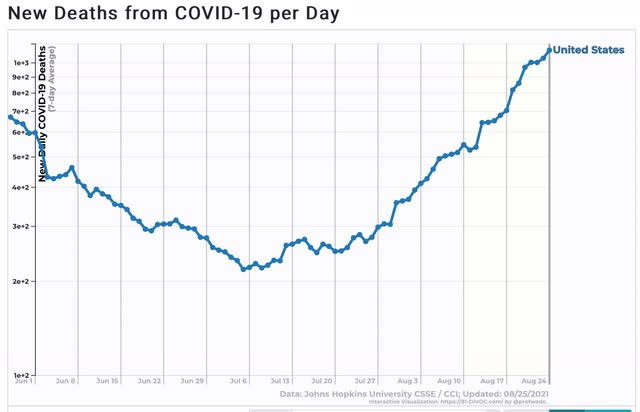 Finally, I have to comment on one item in the news the past few days in which I am clearly a dissenter; namely, the matter of cases in South Dakota in the wake of the Sturgis rally. You’ve probably seen the charts and graphs showing that over a 14 day period beginning on August 7, SD had the highest rate of increase in cases of any State.
There are two problems with the claim: (1) the starting date happened late in a week during the last week in which SD stopped reporting daily results; and (2) the % increases start from a very low number.

As to the second item, note that an increase from 1 to 4 cases is a 300% increase, while an increase from 1000 to 2500 cases is only a 150% increase. The amount of the % increase is strongly affected by how small the initial number is. For example, the purported huge increase of 225% in 2 SD counties’ hospitalization cases, came in counties with exactly 1 and 4 COVID hospital patients.

As to the first item, here is a six-month comparative graph of cases Per Capita in South Dakota vs. Vermont (which has one of the highest vaccination rates of any State): 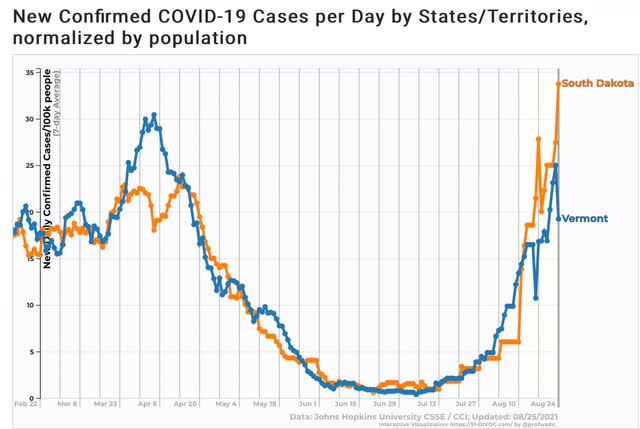 The trajectories of these two graphs over the six-month period is nearly identical.

Now here is a look at South Dakota’s reported cases Per Capita on a daily basis (wide solid line), and the weekly average (narrow dotted line): 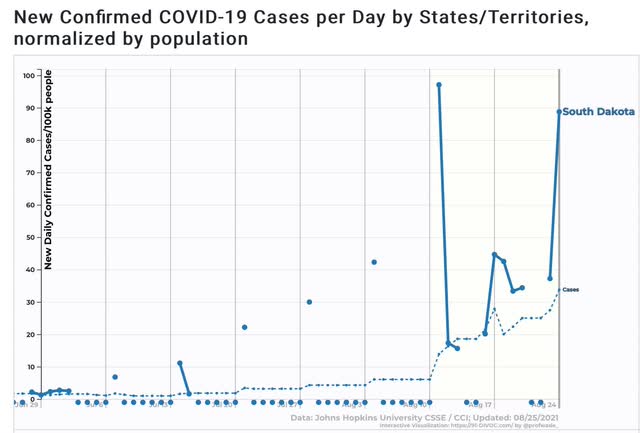 Note that until August 11, SD was only reporting once a week. The rest of the days were entered as zeroes. This meant that the entire time from August 4 through 10 was entered as an average of 6 cases per 100,000; after which on August 11 it abruptly rose to 14 per 100,000. There is simply no way that the number of cases on August 7, the start date of The NY Times charts and graphs, had zero cases. In fact, had SD been updating daily, it probably would have been about 9 cases per day on the 7th, resulting in a 2 week increase of about 2.7x vs. Vermont’s 2.3x increase – higher, but not by much.

I don’t doubt that the Sturgis motorcycle rally has had some effect on increasing SD’s numbers. But we’ll have a much better idea once the artifact goes out of the data starting tomorrow. If SD – with 48% fully vaccinated – and VT – with 67% fully vaccinated – continue to track fairly closely in the next few weeks, that will be significant evidence that there are a large %age of SD’s population with immunity or resistance to COVID due to previous infection.