The UK as Delta wave trailblazer for the US

Coronavirus dashboard for July 19: The UK as Delta wave trailblazer for the US

An initial note: I am on vacation this week, so posting is likely to be sporadic. I’ll still hit the important data.
Now that the Delta wave is well and truly here in the US, let’s compare it with the UK experience, which has been about 7 weeks ahead, to get an idea of where we are going.

Here is the long term view: 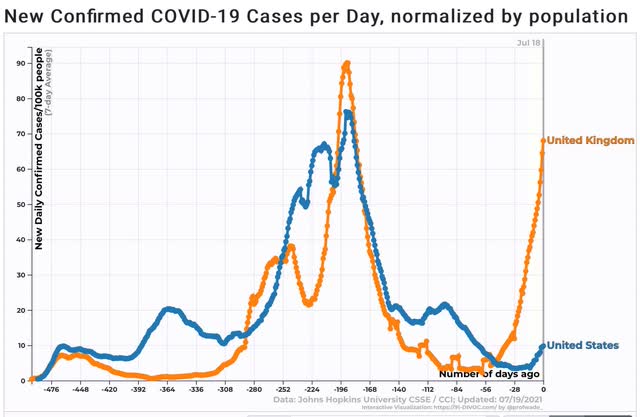 As I said, the UK resurgence due to Delta started about 7 weeks before that in the US.
So the experience in the UK is likely to give us a good idea where the US will be in about 7 weeks.
So here is a look at cases (narrow line) and deaths (wide line) in the UK: 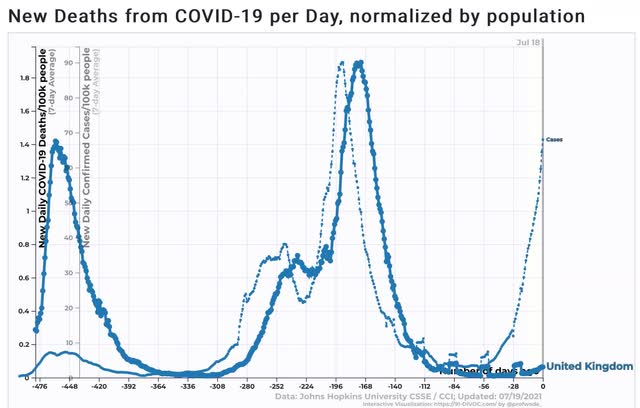 In the autumn and winter wave last year, as well as the Delta wave this year, deaths followed cases with about a 4 week lag.
A similar 4 week lag between cases and deaths shows up in the long term view of the US data: 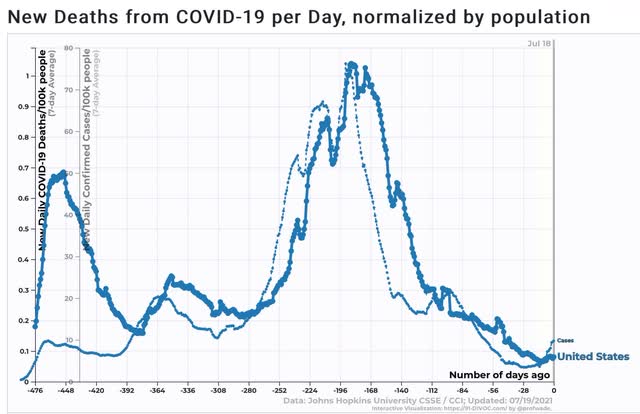 Now let’s take a close-up look at cases in the US (blue) and the UK (orange) over the last 8 weeks: 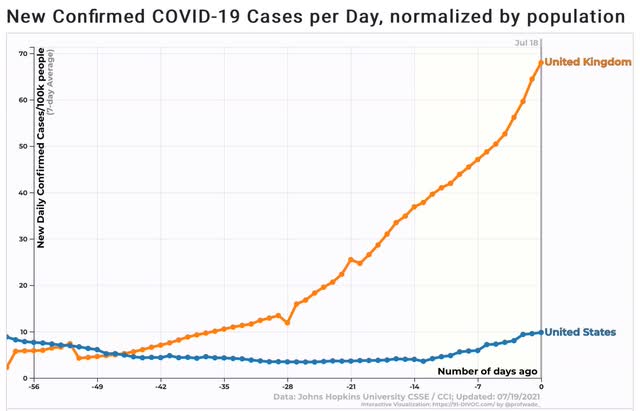 So if we project US cases to double every 2 weeks over the next 8 weeks, as they have in the UK, that puts us at 512,000 cases daily in the US by mid-September (more than double the US’s peak last winter).
Now let’s look at deaths: 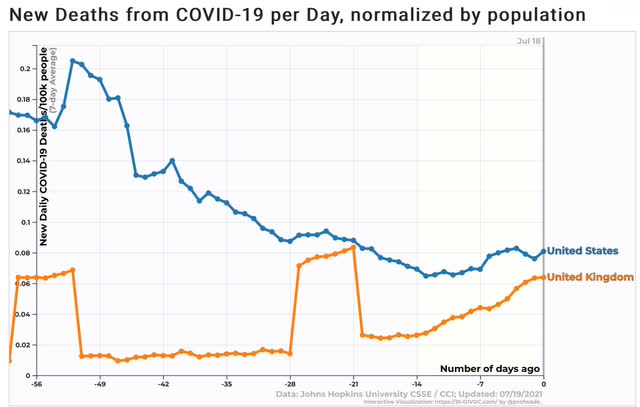 In the UK, deaths bottomed at 8 per day about 6 weeks ago. As of now they have risen to an average of 42 daily, an increase of over 5x. In the last 2 weeks, they have more than doubled. In the US, deaths bottomed at about 215 per day less than 2 weeks ago, and have risen to about 270, a slow increase that is similar to that of the UK in the first several weeks after their bottom in deaths.

If the US follows the same course as the UK, 1 month from now the US will have about 1000 deaths per day.
But remember, deaths follow cases with a 4 week lag. So if the US has 16x more cases in mid-September, then by mid-October there will be over 4000 deaths per day.

The question in the US is whether there will be government interventions at the State level to slow down the spread of these new cases, such as reinstating masking and distancing restrictions and shutting down certain businesses. Unsurprisingly, that is unlikely to happen in the Red States. The other alternative is that individuals reinstate some precautions, such as masking indoors, that they may have recently abandoned. At some point, I believe that *will* happen, even in the Red States (as it did last winter), but I do not know how severe conditions must be first.
What I can say is that, if cases and deaths double every 2 weeks, then in about 4 months the Delta variant will have ripped through virtually the entire unvaccinated US population, with deaths following suit about a month later.