As usual, retail sales is one of my favorite indicators, because it gives us so much information about the consumer economy.

Here’s what the monthly changes in real retail sales look like compared with the other side of the consumer ledger, real personal consumption expenditures (which haven’t been reported for June yet):

The two have moved pretty much in tandem, so this gives me more confidence in the numbers.

But what is going to happen when the pandemic stimulus ends in a couple of months?  This is a legitimate concern if spending is suddenly going to crash. The good news there is, even with recent drawdowns, consumers have increased their personal savings by 65%, or just over $900 Billion since the pandemic started:

This cash, which essentially is being held in reserve, should help cushion consumers, at least in the aggregate, when supplemental payments run out. And the enhanced Biden child tax credit, which is sending checks to millions of American families starting this month, is also going to help immensely.

Next let’s turn to employment because as I have pointed out many times, real retail sales (blue) tend to lead employment (red) and aggregate hours (gold) by about 3-4 months. Here’s the long term YoY look from 1993 through the end of 2019: 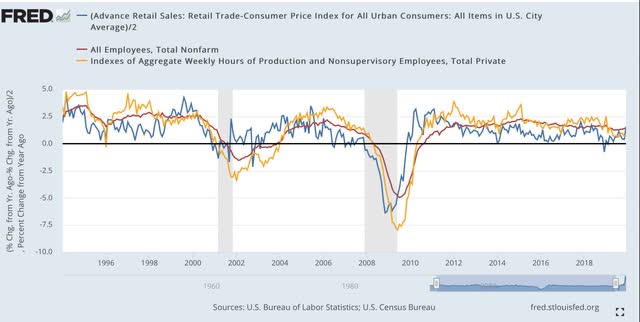 The long lags after the 2001 and 2008 recessions reflected the “China shock” as manufacturing jobs, in particular, were re-sourced to China in large wages after both recessions.

Here is the monthly update since the beginning of 2020 (note the huge difference in scale!):

Since it is hardly surprising that there has been a big YoY jump in jobs in the past few months, given the 22 million loss in jobs in April 2020, the below graph compares the absolute data, normed to 100 as of February 2020 (with an adjustment for the increased volatility of retail sales compared with employment):

We had another big positive month for jobs (+850,000) in June, and the above graph argues that there is more to come. The biggest reasons that there haven’t been even better numbers are (1) the supply bottlenecks in important industries like autos and home construction; and (2) continuing issues with things like arranging child care and continued fear of the pandemic.