Consumer inflation rises the most in over a decade; will it draw the Fed’s attention?

Let me start my take on this month’s inflation report with my concluding remarks last month: “this is not a big deal if it only lasts another month or two. But if the trend continues longer than that, it will begin to impact consumer spending, and it will get the Fed’s attention.”

Well, it has definitely lasted another month. In spades.  The 0.9% increase in June was the highest since June 2008’s 1.0% increase (driven by $4+ gas).(red in the graph below) More importantly, the 5.3% YoY increase is also the highest since summer 2008, and well in excess of the YoY average wage increase for nonsupervisory workers of 3.7% (blue):

This is going to get the Fed’s attention. They may not even wait another month.

Be that as it may, the primary driver of this inflation is not wage increases, it is first and foremost a supply bottleneck in the production of new cars, which is driving insane demand for used cars (blue in the graph below), the prices of which are up 45.2% YoY. Secondarily it is the demand driven increase in gas usage, which has caused those prices to increase 44.8% YoY (red):

On the other hand, rent continues to be somnolent (as is “owners’ equivalent rent,” which is how the Census Bureau tries to measure house prices):

By the way, ultimately the house price spike has been driven by the fact that during the pandemic last year, existing homes placed on the market (which are about 90% of the typical housing market) declined precipitously compared with the typical year: 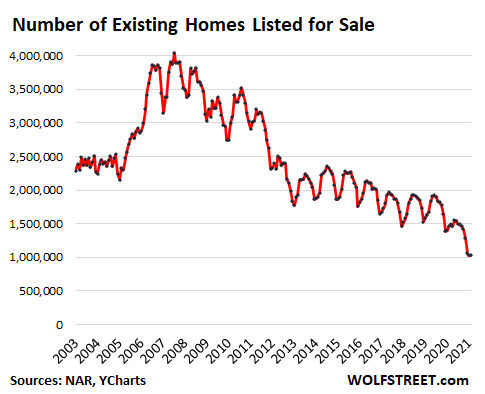 I expect both house prices and gas prices to work themselves out. Not only have home sales declined, but I expect most of the houses that were going to be placed on the market in 2020 to go to market over the next 12 to 24 months. This surge in existing home inventory is going to drive house prices down. Similarly, the travel bug from being cooped up at home during the pandemic is going to pass as well.

That leaves motor vehicles. As I wrote last month, I have no special insight into vehicle part supply chains, and in particular microchips, which have been fingered as a primary shortage.

But, hypothetically, would the Fed raising rates do anything about that shortage? The answer seems a pretty clear “NO,” so why deliberately slow down the rest of the economy to deal with a bottleneck that is beyond their control?Beyond that, as I wrote last month, there have been a number of 10%+ spikes in commodity prices in the past several decades that were brief in nature and worked themselves out without causing a recession:

Ironically, the only way I can see the Fed “helping out” with inflation, is in the area of their “blind spot” – actual house prices. If they were to raise rates just enough to trigger an increase in mortgage rates of 0.5%-0.75%, which would serve to cool down the housing market in a very substantial way without necessarily causing the economy as a whole to stall.