Brace yourself for the surge in deaths

Coronavirus dashboard for July 21: brace yourself for the surge in deaths

I have been warning since late June that the situation would likely look very different by the end of July. By 2 weeks ago, I wrote:

“In the near future, there appears to be bad news and *relatively* “good” news for the US. The bad news is that the “delta wave” is spreading, and we should expect a real outbreak on the order of last summer’s by early August. The *relatively* “good” news is that the death rate is likely not to be nearly so bad if the experience in the UK is any guide.”

Cases have nearly tripled in the US in the past 2 weeks: 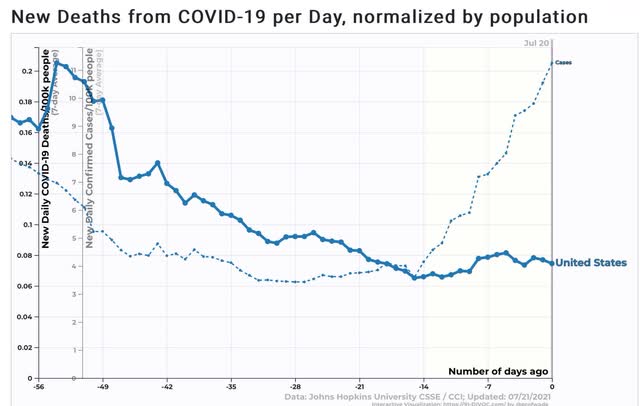 Since deaths lag by about 28 days, we haven’t nearly begun to see the kind of increase that is already baked into the cake. In the UK, the government has been congratulating itself over the low death rate. And in comparison with the number of deaths last winter, they are correct. To some extent, this is due to the fact that 15% more of the UK population has been vaccinated during the Delta wave there: 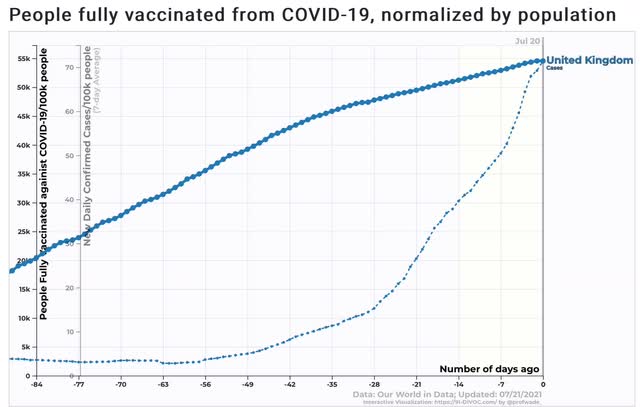 But over the last 2 weeks, the death rate in the UK has actually increased *faster* than the rate of new cases: 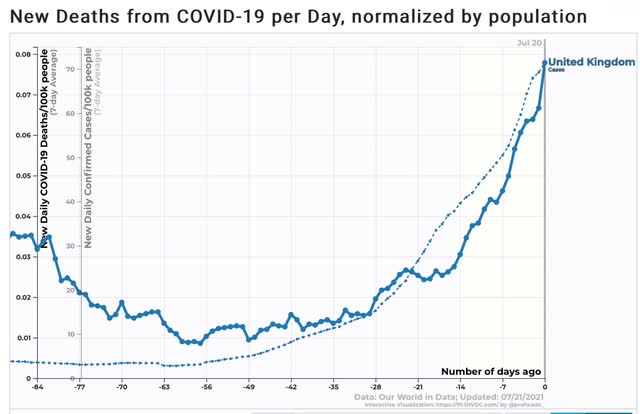 If we compare the increase in deaths in the UK over the past two weeks with the increase in cases 2 to 4 weeks before, it isn’t clear at all that the death rate there isn’t going to follow cases proportionately higher over the next month.
Turning to the US, deaths have only risen slightly so far, but again, since deaths follow cases by about 4 weeks, we are probably only 2 weeks away from a proportionate increase in cases. And in the US, there has been no comparable surge in vaccinations since the onset of the Delta wave. In fact, there has been subsidence.

For a taste of what is in store, here are new cases and deaths in Arkansas, one of the States where the Delta wave increase started the earliest: 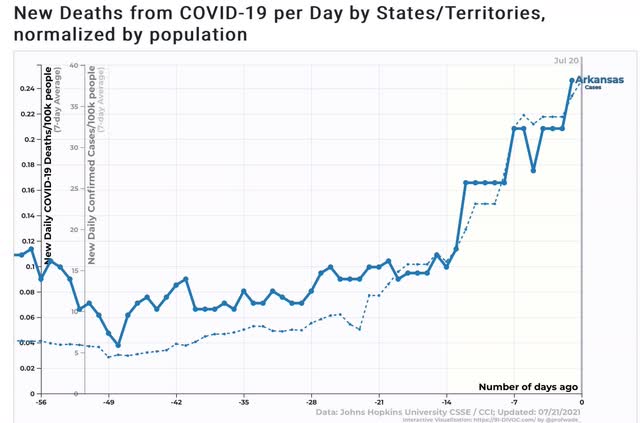 Deaths have risen just as fast as cases and started to rise very quickly after cases did.

So, brace yourselves. Cases have nearly tripled in the US over the past 2 weeks. Deaths are likely to increase to nearly 1000/day over the next 2 to 4 weeks.

One more thing: as I wrote a few days ago, the virus is essentially a parasitic copy machine. Its adaptive mechanism is chance mutation. But the human *reaction* to the virus, and to knowledge about the trend in cases and deaths, is fiendishly difficult to model. For example, almost certainly after hearing from their lawyers, Fox News issued a spate of “get the vaccine!” messages from their hosts. Will that continue, or even intensify? Will Congressional GOPers and Red State governors change their tunes? As cases and even more importantly deaths go parabolic, panic is likely to set in. What will the unvaccinated do then? Impossible to know.