The Dakotas already appear to be shambling towards herd immunity

Coronavirus dashboard for March 3: as good news on vaccinations accumulates, the Dakotas already appear to be shambling towards herd immunity

There is more and more good news on the vaccination front. In addition to the fact that the single-dose Johnson and Johnson vaccine has been approved, President Biden has made use of the Defense Production Act to enlist competitor Merck in additional production of the J&J vaccine. Biden also announced that there would be enough vaccine produced to supply doses for every American adult by the end of May.

Further, the pace of vaccination has picked up to new highs since the setbacks due to recent weather, with the 7 day average just short of 2 million per pay at 1.946 million as of yesterday: 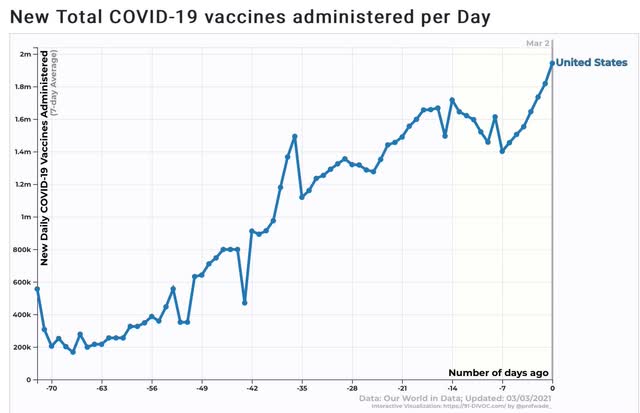 And just shy of 80 million doses have been administered – 78.6 million as of yesterday: 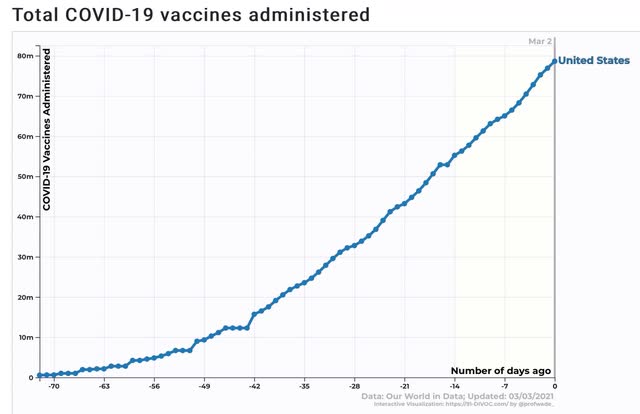 By about Memorial Day weekend, the principal obstacle to herd immunity is going to be anti-vaxxers and other vaccine-hesitant people, primarily stupid GOPers. I wonder if by that time employers will make being vaccinated a condition of returning to work facilities.

In the meantime, one other recent development has jumped out from the graphs: it looks increasingly like both North and South Dakota have shambled towards herd immunity already. That’s because both States’ levels of total infections look close to perfect representations of an “S”-shaped type of exponential curve called a logistical curve. This occurs when a population approaches a saturation point.

Here’s the graphic evidence in a nutshell: 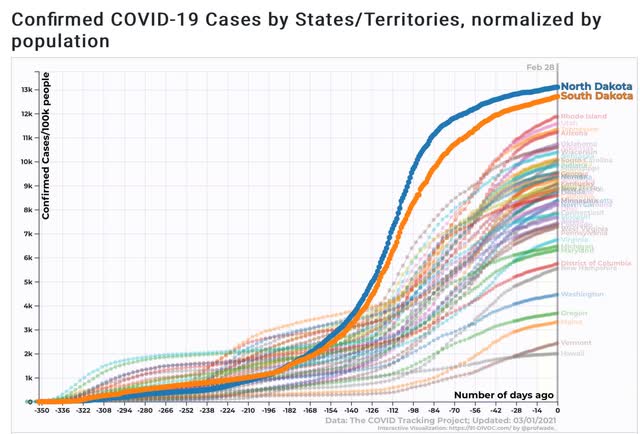 Both North and South Dakota have the highest rate of *confirmed* infections at roughly 13% of their entire populations.

Further, South Dakota is close to, and North Dakota is already among, the lowest 10 States for the level of new confirmed infections: 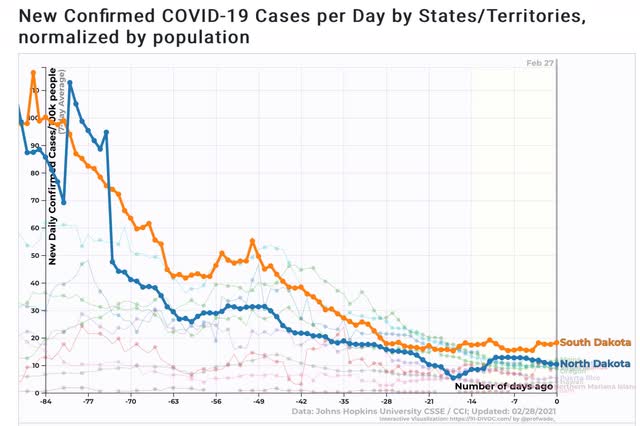 Since neither one of these two jurisdictions is exactly known for their aggressive anti-COVID restrictions, we are either seeing a recent onset of panic among the populace after their late autumn outbreaks or else we are seeing a virus that is facing an ever-thinning number of susceptible individuals.

Most notably, during the autumn outbreaks At least South Dakota had close to a 60% positivity rate among people who were tested, which went on for several weeks – where 3% is the rate at which it is thought that testing is probably picking up close to all actual infections: 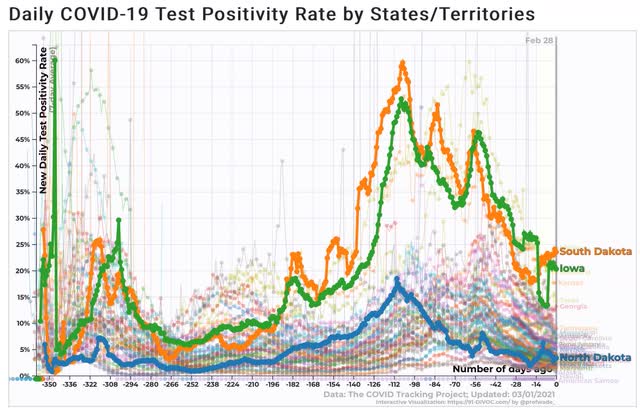 In other words, during the weeks that roughly 10% of their entire populations are *confirmed* to have contracted the disease, it’s entirely likely that some multiple of that percentage were in fact infected, but either weren’t able or just didn’t bother, to get tested. If during those weeks for every one confirmed positive there were 4 actual but unconfirmed infections, then by Christmas an outright majority of the population of both North and South Dakota had actually contracted the disease.

I want to emphasize that I’m not claiming that either State has actually arrived at herd immunity yet. For that to be the case I would expect the rate of current infections to be closer to 1 in 100,000 daily than 10 in 100,000 – and I would expect to see continuing declines, which really hasn’t been the case in the past several weeks. And I am *certainly* not claiming that the result is the case of good government! Far from it, both North and South Dakota have among the highest confirmed death rates from COVID at roughly 1 death for every 500 persons, putting them in the top 10 States: 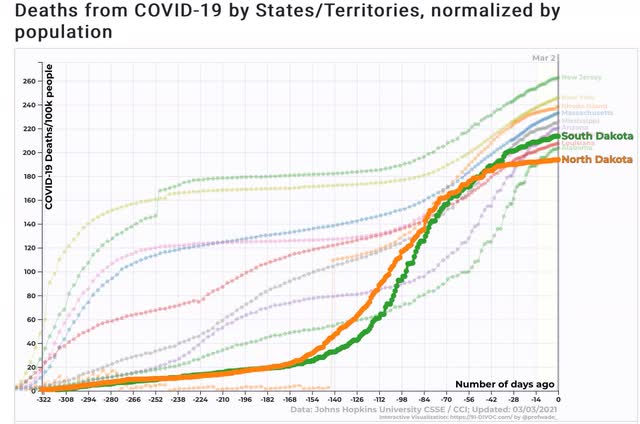 I would love to see what a comparative graph of excess deaths above normal looks like for those 10 States because I suspect that a significant part of the Dakotas’ death toll was never reported.

Here’s hoping that the vaccines get us to herd immunity before the reckless actions of Trumpist GOP governors like Abbott of Texas manage to hatch a resistant strain of the disease.