Here is my weekly update on the 2020 elections, based on State rather than national polling in the past 30 days, since that directly reflects what is likely to happen in the Electoral College.At only 16 days from Election Day, the polls, while actually nowcasts rather than forecasts, are probably less than 2% off the final result. With the exception of the last Presidential debate and any *significant* “October surprise,” all of the fundamentals of the election are already “baked into the cake.” Because some GOP voters will likely still “come home” in the next two weeks, I expect the race to tighten a little bit.

There are two big takeaways from the present situation:

1. In the Presidential election, Biden’s lead has not just been steady, but on a national level has been pulling decisively away from Trump, to the biggest lead of the entire year: 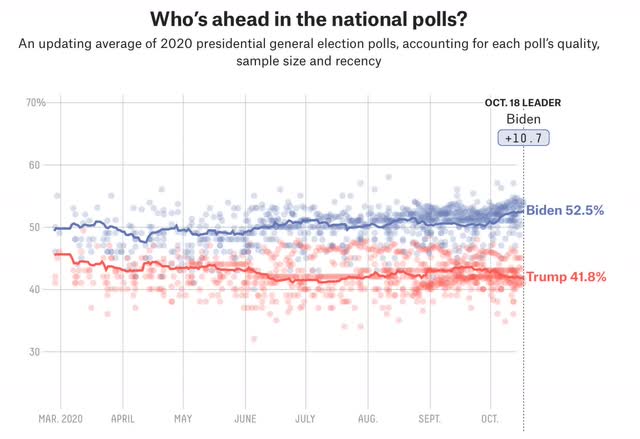 2. The Senate elections show very little variation from Presidential polling in the affected States. The only 4 States in which contrary results at the two levels look reasonably possible are Georgia, Iowa, North Carolina, and South Carolina.

With those statements out of the way, here is this week’s update.

Trump has continued to have a bad October. In the past week his approval rating declined by another -0.8%, while his disapproval rate rose a full 1.0% to 53.2% – which is still within the normal range of approval going back over 3.5 years: 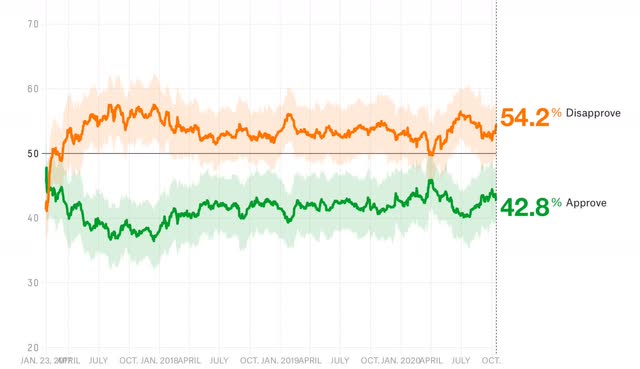 Here is this week’s updated map through October 17 for the Presidential election. To refresh, here is how  it works:

A reminder: When we get to the last week before the election I will probably move any State with a 1%+ differential to “lean Democrat/GOP,” rather than stay with 3%. 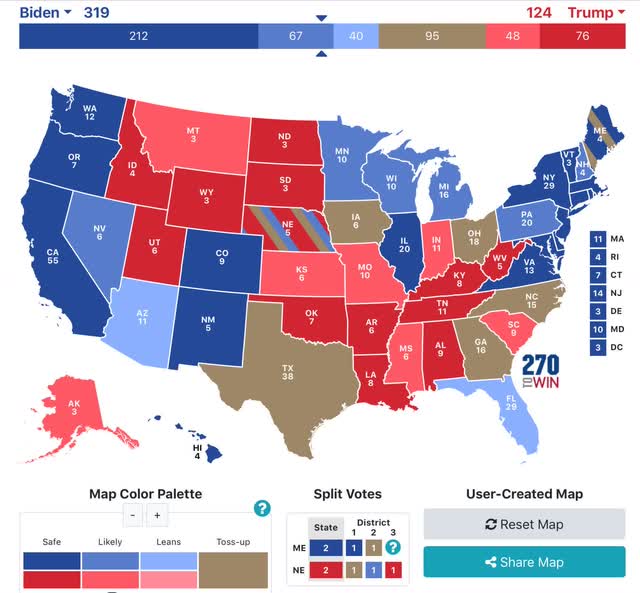 There was something remarkable this week: not a single State changed ratings. That’s how static this race is. Biden’s “solid” plus “likely” Electoral College votes remained at 279 this week, below their peak of 302 over two months ago – but Biden still doesn’t need Florida or Arizona in order to win.

Biden’s support remained at 50%+ in Michigan, New Hampshire, Pennsylvania, Wisconsin, and Minnesota. While Arizona declined to 49%, Florida and North Carolina were 49%+. This makes it extremely hard for Trump to mount a successful comeback in those States. 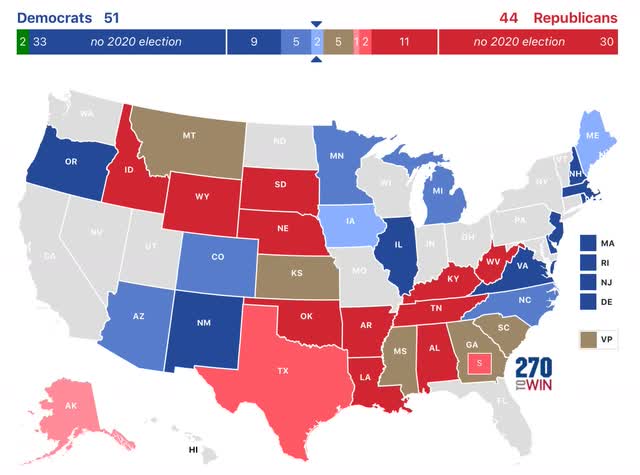 At current polling, if Democrats win all those seats in which they are favored, they will have 51 Senate seats. There are also 5 races now rated “toss-ups,” as to which the most important question is how many undecided voters “come home” to the GOP candidate. Still, it is quite likely that the Democrats wind up with a majority in the next Senate.