I have more to say about industrial production, and some general economic analysis about retail sales, which are pending at Seeking Alpha. I will post a link once that article goes up. UPDATE: Here’s the link: Link

For this blog, let’s focus on how real retail sales are likely to affect employment.

Just to start, here is are CPI adjusted retail sales. You can see that they have actually jumped once the Congressional stimulus kicked in, and have remained well ahead of pre-pandemic levels:

As I have said many times in the past, consumption slightly leads employment. It has almost universally done so for the entire 70+ year history that both measures have been kept. Basically, demand for goods and services drives hiring to fulfill that demand (or at least to an increase in hours employed) typically within a few months later.

I am frankly very surprised that sales have held up in the past several months, despite the ending of emergency Congressional assistance. But done so they have – although it may largely be a function of seasonal distortions caused by the pandemic.

But, turning to employment, historically consumption has led employment (/2) by several months (albeit with lots of noise), and has an even closer relationship with aggregate hours (all shown YoY below): 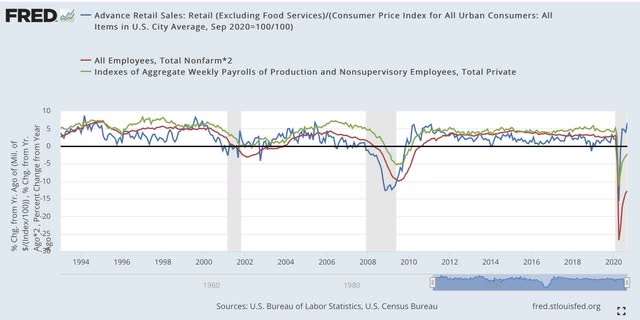 Here is a close-up on the past year: 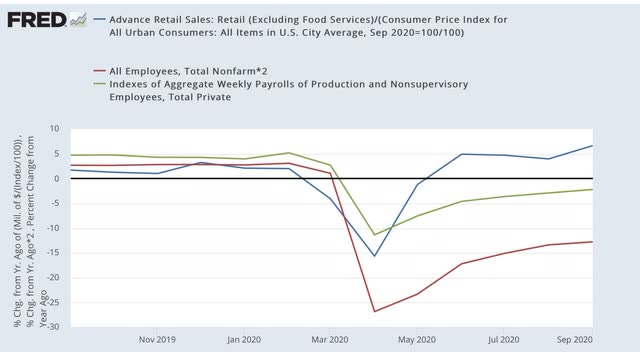 Because sales have made a full recovery, and indeed on a YoY basis are accelerating, I expect employment and hours worked to continue to show gains for the next several  months, although at a slower pace similar to what we have seen in the August and September reports.