A special reminder: these polls were all taken before Trump’s COVID-19 diagnosis, and only a few were entirely after the debate.

The best news for Trump, and the worst news for Biden, is that despite an awful debate performance, Trump’s approval *rose* 0.7% over the past week, while his disapproval dropped 0.4%. He is now near the upper end of his normal range of approval going back 3.5 years: This may be a reaction to his nomination of a Judge for the Supreme Court who is on record saying that both Roe v. Wade and the ACA should be overturned. It is way too soon for Trump’s COVID-19 diagnosis to be showing up in these polls.

Turning to the Presidential elections, here is this week’s updated map through September 26. To refresh, here is how  it works: 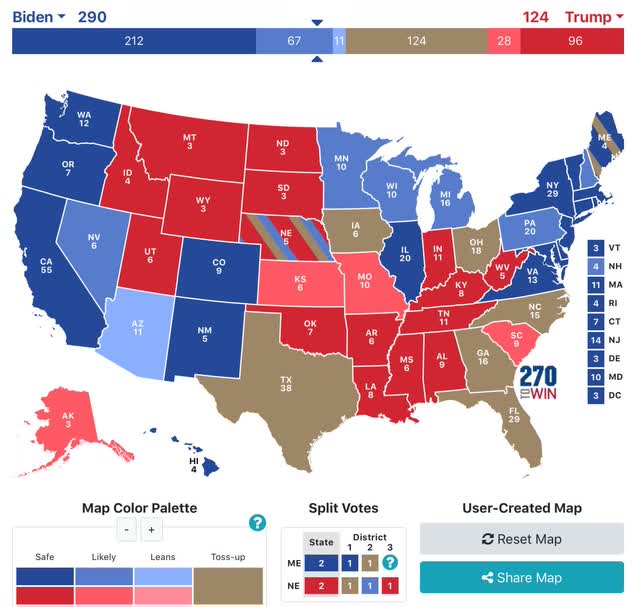 One week ago there were a number of changes adverse to Biden. The good news for him is that this week most reversed. Pennsylvania and New Hampshire both improved back to “likely Biden,” and Virginia improved from “likely” to “solid Biden.” Arizona remains “lean Biden,” however, and Florida remains a toss-up. Also, several States in the Deep South and Appalachia, which had only been lightly polled, were polled again this week and moved to “solid GOP,” but this was expected and does not change any significant calculations.As a result, Biden’s “solid” plus “likely” Electoral College votes improved from 255 last week to 279 this week, although they remain below their peak of 302 two months ago.

Biden’s support also improved to 50% or more in Michigan New Hampshire, and Pennsylvania, in addition to Wisconsin and Minnesota. This makes it much harder for Trump to mount a successful comeback in those States.

With the September jobs report in the books, all of the important pre-election economic reports are done. The economic recovery from the depths of the coronavirus has decelerated sharply. I have been expecting some incremental improvement in Trump’s position as voters who were leaning GOP “come home,” and this probably is happening among some alleged swing voters. Last week I said that the final right-wing takeover of the Supreme Court would probably be front and center for October, along with Trump’s refusal to commit to an orderly transition if he loses. Trump’s COVID-19 diagnosis and hospitalization at least temporarily put an end to the latter, but its ultimate effect on voting is, to say, the least, unclear.

Turning to the Senate, the only change this week was important, as the second Georgia Senate race also turned from “lean GOP” to “toss-up”:

At current polling, if Democrats win all those seats rated “solid” and “likely,” they will have 51 Senate seats. With 8 races now rated “toss-ups,” if they were to take them all they would have 59 seats. and have improved from 55 to 59 in the past two weeks if they were to win all of the “toss-ups.”

In short, Democrats look in better and better shape to obtain a majority in the Senate.
Comments (2) | Digg Facebook Twitter |
2 Comments