Yesterday  (Sept. 16) the Census Bureau released its 2019 information concerning median household income and poverty rates. Unfortunately, this data is always released in September of the following year, so is already somewhat stale. Just for example, since the information is collected between February and April of the following year, we may not get complete information about the impact of the coronavirus until two years from now!

Also, since the information is across *all* households, not just wage- or salary-earning households, but includes, for example, retirees as well as the unemployed, it should not be used to infer information about wages.

That being said, in 2019 the economy was doing very well, and both un- and under-employment were reaching repeated new lows, and inflation remained subdued, real median household income rose significantly – up 6.8% over 2018:

As is obvious from the graph, this was a new all-time high.

As a result of the same factors, the poverty rate (the percentage of households living in poverty) declined to 10.5% – also a series low: 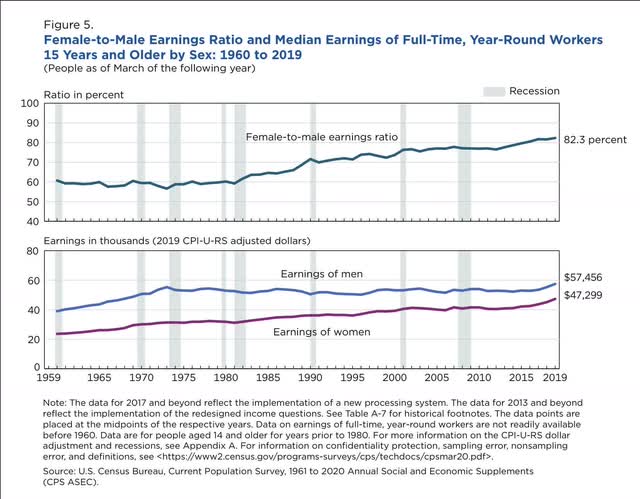 These are all very good statistics. And not just “good” economically, but while obviously not perfect, are very good for broad society as well. Had the pandemic not happened, or if there had been a coherent response to it as occurred in neighboring Canada and virtually all other industrialized countries, it wouldn’t be a one-off that almost certainly has been sharply reversed.