The Postal Service is under assault and it is time to do everything we can to protect the integrity of one of our greatest national assets. Retired U.S. Postmaster Mark Jamison writes at Save The Post Office Blog . Mark serves as an advisor, resident guru, and regular contributor to “Save the Post Office.” His previous posts on Angry Bear and Save The Post Office can be found here. Mark can be contacted at markijamison01@gmail.com or you can ask him questions on his post here at AB. 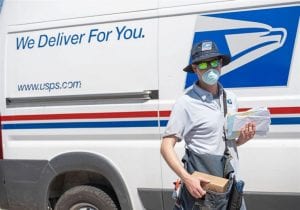 The United States Postal Service is an essential national infrastructure. That simple and indisputable fact has never been more evident than during the current pandemic. A network that has the capability to serve every address in the United States, almost all of them daily, is a lifeline and a necessity.

It’s no secret that the Postal Service, like much of the infrastructure in this country, has been under assault by those who are ideologically predisposed to dismiss the necessity of a functioning, well-managed government. They would like to privatize the postal system, the national parks, the schools, the railroad, even roads and bridges. For them, these public infrastructures are merely targets of opportunity, another way for the few to profit at the expense of the many. By disregarding and undermining the value of public infrastructure at the expense of domestic tranquility and the promotion of the general welfare, they do a great disservice to the country

The postal system has been a target for generations. The privatizers and those who could not discern the fallacy inherent in trying to run government as a business when their ends and purposes were very different have repeatedly sought to turn the postal system into something much less useful than a nationwide infrastructure. Over the last fifteen years, since the passage of PAEA, the capacity and institutional strength of the USPS have been compromised by a succession of Postmasters General who substituted empty rhetoric and misguided plans for the very real value of a broad and robust network dedicated to universal service.

The current president came into office with lots of grudges and fury but no knowledge or understanding of the Postal Service. For the last three and a half years he has overseen the corruption of our institutions, the debasement of our bureaucracies, and the hollowing out of our ability to serve our citizens. The administration has acted with malice and ignorance, failing at its most basic task of governing. Nowhere has this been more evident than in the mismanagement of the Postal Service.

Recently a new PMG was installed. Mr. DeJoy has a background in logistics, one that might perhaps be useful in managing a postal network were it not for the very real conflicts of interest between his private investments and his public duties. Mr. DeJoy’s main qualification for the job seems to have been his large political contributions along with his willingness to carry the president’s stated desire to throttle the Postal Service.

His current austerity tactics along with the disdain of Mr. Mnuchin at Treasury threaten to starve and permanently disable this national infrastructure that provides so much and employs so many. Mr. DeJoy, like the president he serves, seems more intent on destroying value rather than serving the needs of the American people.

It appears the American people are waking up to the damage this president and his administration have done to our country. No president has suffered such consistently high disapproval rates. Current polling indicates that the administration and many of its enablers in Congress will be replaced during the November election. Unfortunately there is much damage that can be done before they leave office next January.

That is even more the case with the Postal Service because of its structure. The Board of Governors selects the PMG and only they can replace him. The PRC has oversight but the wheels turn slowly, more slowly because it is almost assured that any steps by the PRC to hold the current BOG or PMG accountable to standards will end up in court, or worse, be ignored.

There are however some steps that can be done to ensure that the Postal Service remains viable. First, Congress must insist in any stimulus bill that sufficient funds are provided to stabilize the Postal Service through next January. There must also be language in the bill requiring the PMG to adhere to established mail delivery standards and to obey all directives and orders from the PRC. The bill should also direct the PRC to open an advisory opinion docket on impacts of the PMG’s plans and directives with respect to service while also encouraging efforts to preserve the capacity and viability of the postal network during the pandemic.

The Biden campaign should make clear that one of its priorities upon taking office will be postal reform legislation that recognizes the Postal Service and the postal network as essential national infrastructure and supports a strong public postal service with a robust universal service mandate. Furthermore it should be made clear that a failure on the part of postal management including the BOG to preserve and protect this important American asset will be subject to strict standards of accountability.

Mark has been a commenter and poster on USPO issues for about 6 years now. I found this in may email box just moments ago. This post adds to Kevin Melvin earlier post on the USPO and the threat it is under from Trump and Republicans.