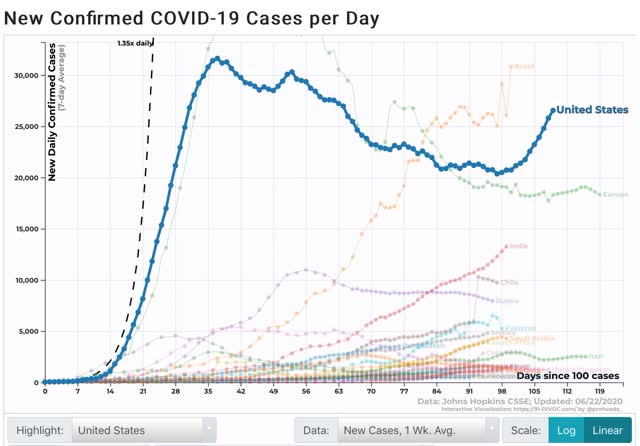 On a per capita basis, US infections are now roughly 4x those in Europe: 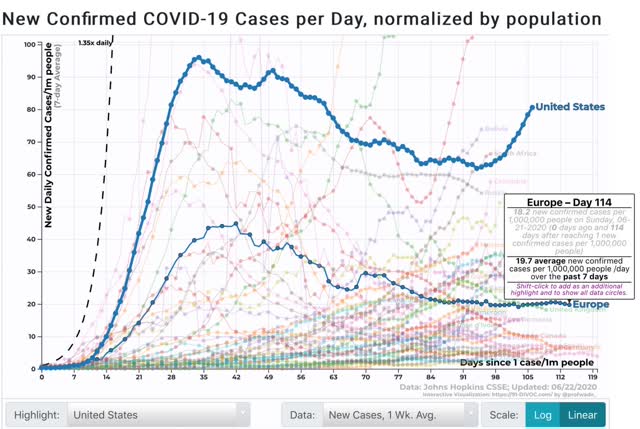 Curiously, the 7 day average of deaths has continued to decline, to 605 as of yesterday: 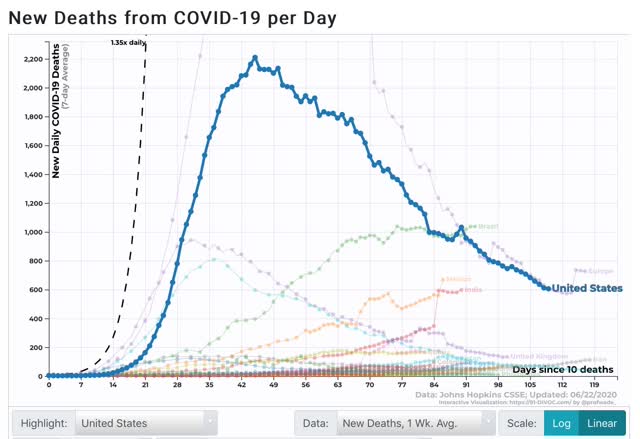 On a per capita basis, US deaths from coronavirus are only 2x those in Europe: 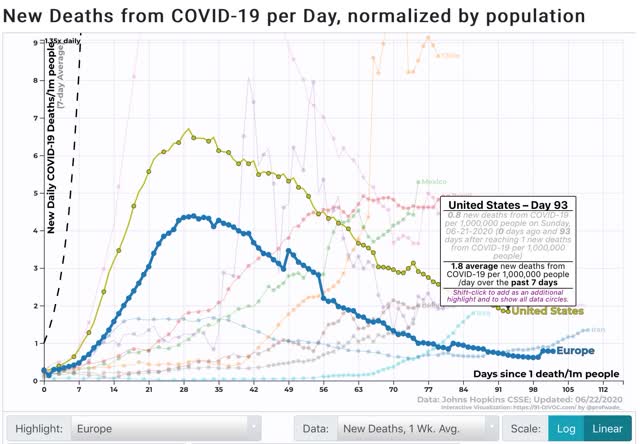 Within the US, the per capita rate of infections has continued to fall in the Northeast megalopolis, risen slightly in the Midwest, but is rising at what may be exponential rates in the South and West: 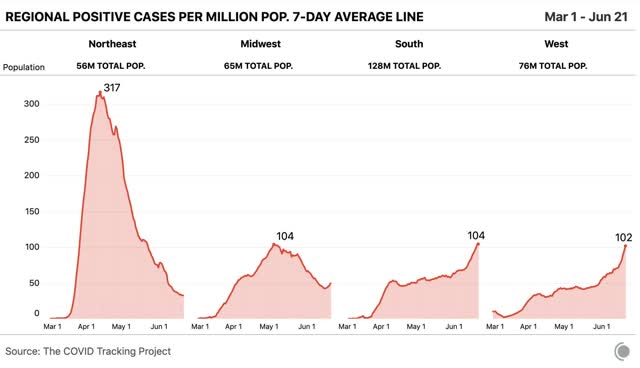 The poster child for confirmed new exponential spread remains Arizona, which now has a rate of new infections 2/3’s that of NY at its peak, and is likely to match that within a week: 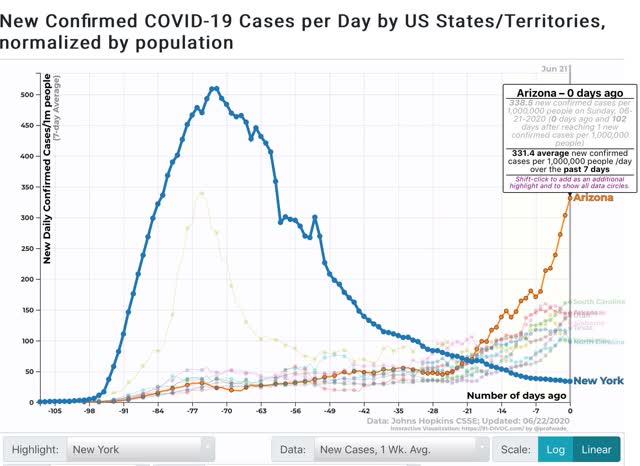 The remaining “top 10” for new infections per capita are all from the Confederacy, plus Utah – and they are also all rising, in the 100 to 160 new cases per million per day range.

When it comes to deaths, however, the “top 10” are almost all from the Northeast megalopolis, led by Massachusetts, but they are in serious decline: 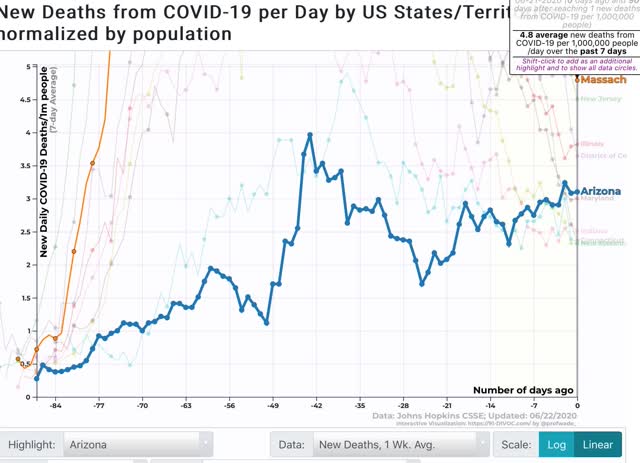 Only Arizona from the new outbreaks has risen into the “top 10” for deaths.

The continued decline in new deaths may just be a lag in the data, but there are several other possibilities as well:

– better hospital treatment
– shutting down nursing home spread (since nursing homes were responsible for over 1/3 of all deaths in the first several months of the pandemic.

Perhaps most significantly, the paradox may be explained by the average *age* of those newly infected. The evidence is, it has dropped precipitously.

Unfortunately, I failed to copy the graph I saw of the total US statistic for that measure, but here is an age-breakdown for US testing and % positive: 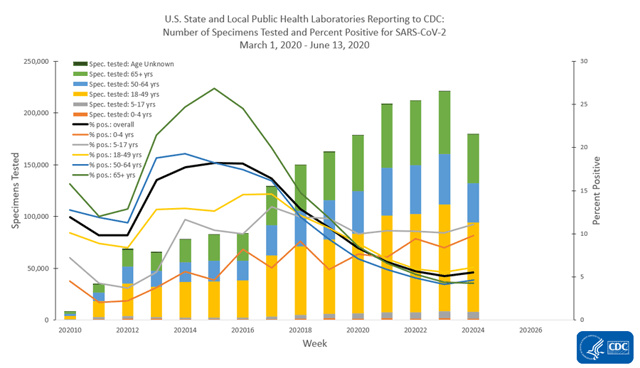 Those in age group 18-49 years saw a much bigger increase in tests administered, and less of a decline in the % positive – meaning a higher rate of diagnosed infections in that age group.

Here is the age breakdown for Mississippi: 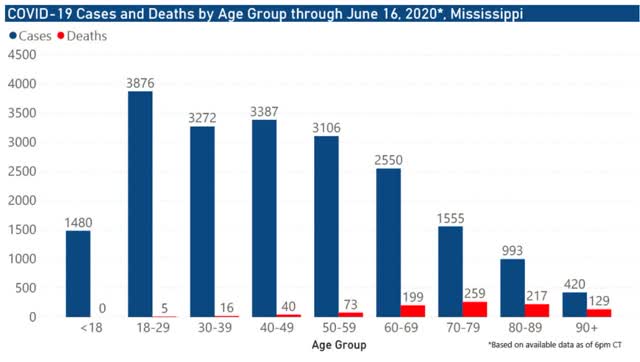 And here is a chart of the age breakdown for Maricopa County, Arizona: 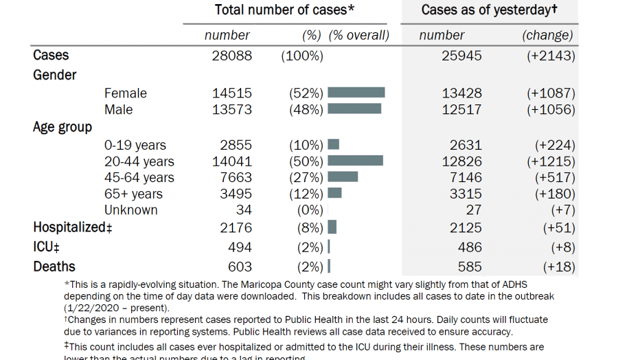 Officials in states across the South and Southwest are reporting that an increasing share of coronavirus cases are among the young.
For example,

The shifts in demographics have been recorded in parts of Florida, South Carolina, Georgia, Texas and other states — many of which were some of the first to reopen.And while some officials have pointed to more widespread testing being done, others say the new cases stem from Americans failing to social distance.

In Mississippi, where one health officer called adherence to social distancing over the past weeks “overwhelmingly disappointing,” officials attributed clusters of new cases to fraternity rush parties.

Texas Gov. Greg Abbott said last week that people under 30 made up a majority of new coronavirus cases in several counties. He said that increase in young infected people could be related to Memorial Day parties, visits to bars or other gatherings.

And in Florida, Gov. Ron DeSantis said Friday that the median age was 37 for newly diagnosed coronavirus cases over the last week. In the state, 62% of new cases for the week of June 7 are under 45 years old, he said.

“That is a big change from where we were at the end of March and the beginning of April. It was skewing much older at that time,” he said.

Similar news has been reported from California:

As California’s economy opens up, coronavirus cases are getting younger and younger.An analysis released this week reveals that more than 44% of new diagnoses are in people age 34 or younger, up from 29% a month ago.

There’s a corresponding drop in cases among older people. The proportion of COVID-19 cases among Californians older than 50 has plummeted from 46% to 30.5% in the past month.

The proportion of cases among middle-aged Californians — ages 35 to 49 — has plateaued, neither rising nor falling.

“It is striking that there is such a strong shift. Cases are much younger now than they were earlier in the pandemic,” said infectious disease epidemiologist George Lemp, who calculated the trends using historical data from the California Department of Public Health.

“It may reflect the opening up of California since mid-May, particularly among younger people who may have started to move away from the practices of social distancing and consistent mask use,” he said.

It appears that the de facto US policy is to allow the virus to run through the younger population, while the older part of the population voluntarily continues to self-quarantine. Even with a low fatality rate like 0.2% among the younger demographic, that would translate into roughly 300,000 deaths among that group alone.
My take has been that the US simply lacks the political and social will to take the necessary steps to effectively contain the virus. Arizona is going to be the canary in the coal mine for whether States with Trumpist governors and GOP legislatures will ever be scared into action, and we should get that answer within the next 2 weeks
Comments (13) | Digg Facebook Twitter |
13 Comments