Abbreviated Coronavirus dashboard for June 15: tracking the four horsemen of the reopening apocalypse

Abbreviated Coronavirus dashboard for June 15: tracking the four horsemen of the reopening apocalypse

– by New Deal democratThere’s no big economic news out today. So let me follow up on my post Friday about the cost of reopening recklessly coming due.

Here is the graph from 91.divoc.com of the 10 States with the highest per capita infection rate over the past 7 days ending Saturday: 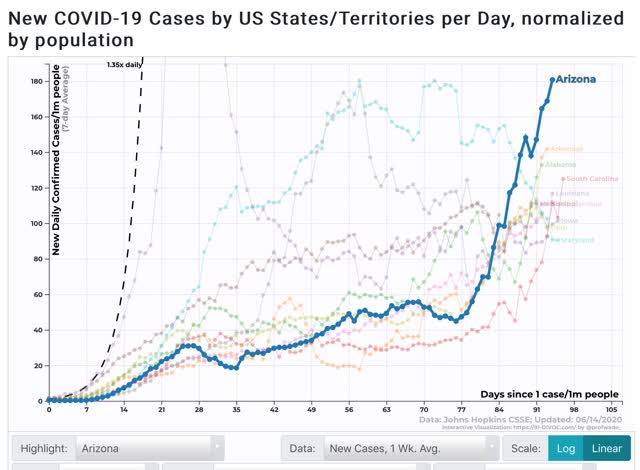 With the exception of rapidly declining Maryland, the focus has almost entirely shifted away from the Northeast and Midwest and instead to the Confederacy plus Iowa, Utah, and Arizona. The 4 “leading” States are Arizona, Alabama, Arkansas, and South Carolina.

I’m having problems with the 91-divoc site this morning, but the raw data through Sunday shows a slight decline for Arizona, but a 12% increase for Alabama and a whopping 25% increase for Arkansas, bringing it up to Arizona’s level. South Carolina is steady.

Among the other States with recent big increases, North Carolina saw a 6% further increase as of Sunday. Utah and Iowa had slight increases. Mississippi had a 13% decrease in the 7 day average.

Finally, although they aren’t among the 10 States with the highest per capita new infections, both Florida and Texas have also seen big increases in cases in the past two weeks (both have had about 60 cases per million per day as of several days ago). Through Sunday, Florida’s rate increased another 8%, while Texas saw another 3% increase.

Bear in mind that, at its worst, NY had over 500 new infections per day per million population, so even Arizona and Arkansas are less than 40% of that rate. It remains to be seen how much pain these States can take before they decide to change their ways – if ever.