The humans always observe back: why I am rooting for NY to “crush the curve”

The humans always observe back: why I am rooting for NY to “crush the curve”

So, in addition to a bunch of States in the Confederacy and a few in the high plains deciding that May 1 was the Day of Virus Jubilee, yesterday saw further discouraging news that not one but two epidemiological models drastically increased their estimates of deaths, while there was another revelation that Trump and the White House were relying on a “cubic” model devised by Kevin Hassett of “Dow 36,000” infamy, showing death abruptly declining to zero by about May 15.

First came the CDC model, that shows deaths beginning to increase exponentially again after May 14 (not coincidentally, two weeks after the Day of Virus Jubilee): 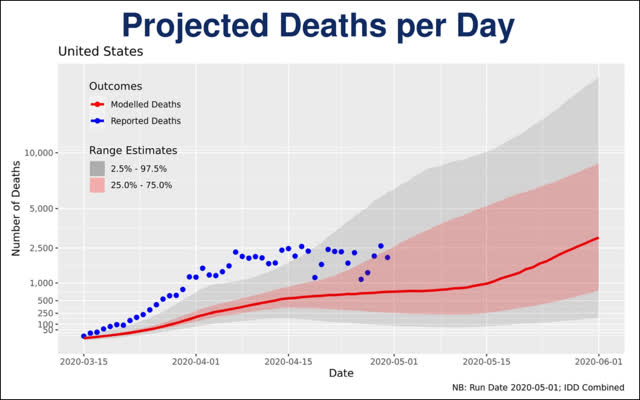 Then, the IHME, whose model had only recently forecast 60,000 total deaths from the virus, and as recently as a week ago showed deaths declining to *0* by June 1, revised the model to show instead a gradual tapering off of deaths throughout the summer, with a total death toll of 135,000: 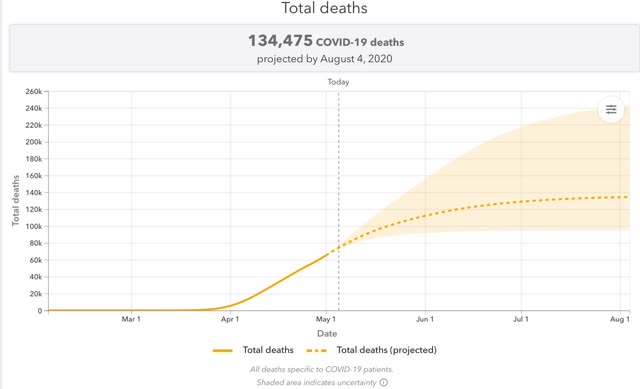 IHME director, Dr. Christopher Murray confirmed to Anderson Cooper last night that the change was indeed made because of the Day of Virus Jubilee.

Finally, Nate Silver and Matt Yglesias, among others, were quickly able to figure out that Hassett’s “cubic” model (and probably the IHME’s old model as well) were relying on a third order polynomial function that in Hassett’s case was probably designed to give the most sunny outcome desired by Trump. Here’s Silver’s work:

Silver said it took him “about 45 seconds” to figure this out.

Which brings me back to a point I have made before: when you publicly observe human behavior, the humans always observe back, and change their behavior based on the results of your observations.

That appears to be what happened with the IHME’s original model. As Andy Slavitt observed, he discovered when he interviewed Dr. Murray four weeks ago, it made a bunch of optimistic assumptions, including that full social distancing would be observed through the end of May:

Trump, among others, immediately seized upon the IHME model to claim that the pandemic wasn’t nearly going to be as bad as people feared, and that the very social distancing steps taken to contain it were overreacting. This in turn led Trump, some Chamber of Commerce types, and some RW astroturfers to foment the “LIBERATE” demonstrations, which all together resulted in compliant Trumpist governors in the Confederacy to roll over.

Now the IHME and the CDC have taken into account this twist in the human behavior and seriously altered their models. We can expect, if the reality in the States which have “reopened” begins to match what the revised models show, that the humans will change their behavior again in response.

This is the dynamic I had in mind several weeks ago when I wrote that the US was on an actual trajectory of “flattening the curve” – almost all of the deaths happen, they just happen at a slower pace that doesn’t overwhelm medical resources – at least until next January (if a new President should be taking office).

Which brings me to New York.

By way of introduction, let me show you the trajectories in deaths of 3 big Western European countries all of which have endured pretty bad outbreaks.

First, Italy, which was one of the first countries hit hard back in early March: 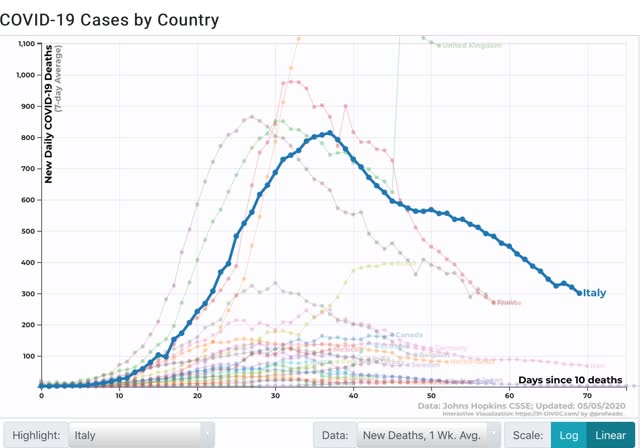 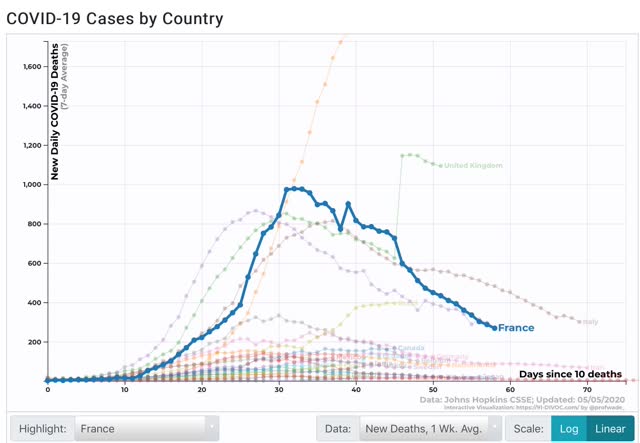 Finally, Spain, which on a per capita basis has the worst record of any of the major counties in Western Europe:

New York is down -57% 21 days after peak – and I am not counting the 2 day surge in the middle of April that were the result of adding in some cases not previously entered.

Quite simply, New York State is on a downward trajectory better than that of Italy or Spain, and close to that of France.  New York is on track to “crush the curve” within the next 4 weeks.

I am rooting for New York to succeed, precisely because, when you observe a successful human behavior, the humans always observe back, and many of those who have not been successful will alter their behavior to emulate the success.

In other words, if New York, a State of 18 million people, succeeds where almost all the other States have failed, there is going to be a mad rush by many of the governors to ape NY’s methods – if not of their own accord, then to stay ahead of the torches and pitchforks of their citizenry. And that could lead to a better outcome than the alternative, a dispirited flattening of the curve for the next 8 months.