Plight of Indians During Epidemic and Who is Helping

About a month ago I wrote on the COVID 19 plight of the Navajo Indians in New Mexico, Arizona and Utah. New Mexico Governor Lujan Grisham requested military field hospitals to be set up to handle the fast moving virus. Trumps comment was, “Wow, that’s something.” The U.S. Army Corps of Engineers and Federal Emergency Management Agency together constructed three reservation field hospitals to be used as alternative care sites according to the tribe earlier in the month of April..

WINDOW ROCK, Ariz. — The Navajo Department of Health in coordination with the Navajo Epidemiology Center and the Navajo Area Indian Health Service, reported 85 new cases of COVID19 for the Navajo Nation and a total of 79 deaths as of Tuesday. The total number of positive COVID-19 cases for the Navajo Nation has reached 2,559. A total of 15,651 COVID-19 tests have been administered with 11,609 negative test results.

Navajo Nation President Jonathan Nez: Today, the federal government announced that they intend to release a portion of funds appropriated by Congress over one month ago to tribes to help fight COVID-19, but I’ll believe it when I see it. We’ve had to file a lawsuit to get what states received weeks ago. We couldn’t sit around and wait for those dollars, so we’ve had boots on the ground in nearly 20 communities giving out food, water, fire wood, protective masks, and other supplies using our own dollars and contributions from outside entities. This will help many families, but we need to continue to do our part as individuals by staying home as much as possible to flatten the curve.”

Another donation to the Navajo Nation is coming from overseas. 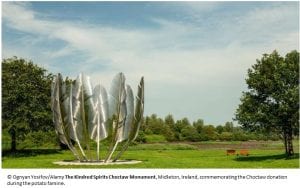 “More than 170 years ago, the Choctaw Nation sent $170 to starving Irish families during the potato famine. A sculpture in County Cork commemorates the generosity of the tribe, itself poor. In recent decades, ties between Ireland and the Choctaws have grown.

Hundreds of the people of Ireland are repaying the kindness shown to them during the potato famine by giving to a charity drive for two Native American tribes suffering from the Covid-19 pandemic. As of Tuesday (5th), the fund-raiser has raised more than $1.8 million to help supply clean water and food and health supplies to people in the Navajo Nation and the Hopi Reservation, with hundreds of thousands of dollars coming from Irish donors.

The generosity of the Choctaw came not long after the United States government forcibly relocated the tribe and several other American Indian tribes from the Southeastern United States to  western parts of the US in a march of thousands of miles known as the Trail of Tears that left thousands of people dead along the way.