Are new coronavirus infections increasing in States that “reopened” on or about May 1? The jury is still out. The number of infections is up in 4 of the 5 biggest States that have done so, but so are the number of tests. The likelihood that most or all of the increase is an artificial of an increase in testing depends on the date on which you start your comparison.

First, here are new coronavirus infections, which are up 42% from April 30: 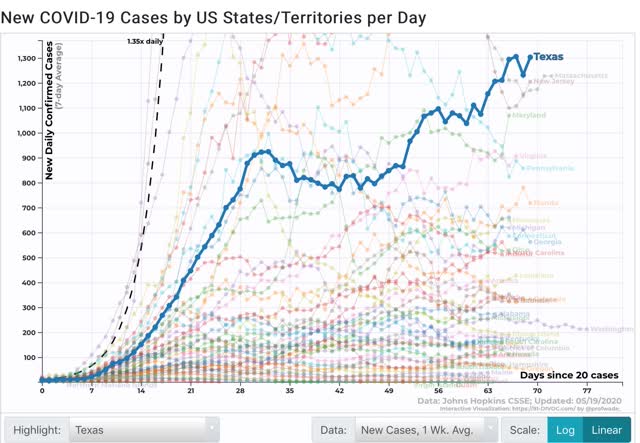 But here are new tests performed, which are up 120%: 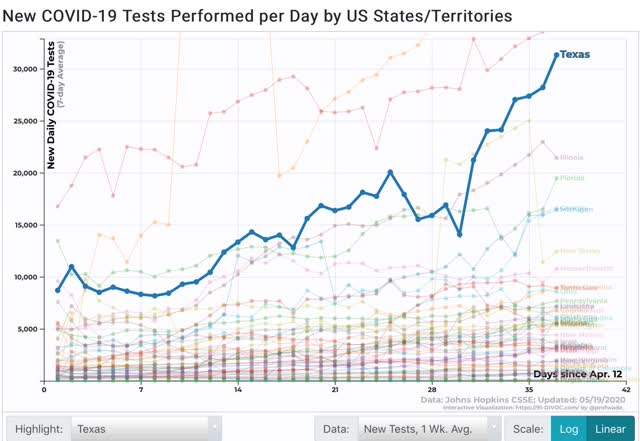 To save space, I won’t show them, but the trends are similar in the 4 other States, except in Georgia, where there has been an actual decline in new cases reported since April 30.

Instead I’ve prepared the below chart of both the increase in tests and increase in cases for the 5 target States. Additionally, as you can see in the graph of Texas above, there seems to have been a renewed pulse upward in new cases since May 10. Since there is a 5 to 10 day lag between exposure and the onset of symptoms, this may be what is showing up. A similar pattern seems to be occurring (but could be just noise!) in several of the other States, so the below graph also compares test increases to new infections dated from May 10 as well:

All 5 States show bigger increases in tests than in new infections when dated from April 30. Dated from May 10, 3 of the 5 States – AZ, FL, and TN – show a bigger increase in new cases than in testing. Georgia remains a complete outlier, but has been shown to have important data integrity issues.

It is certainly possible – indeed likely – that many people, especially seniors, are probably continuing to practice safe distancing and mask wearing habits, despite the local governments’ lifting of restrictions, and this is probably at least a partial explanation of the data. But the virus is impervious to ideology. To the extent people in the “reopened” States are engaging in unsafe behavior, we should expect new infections to increase. Nevertheless it is safe to say that nothing dramatic has happened in the first three weeks of May.