Here are a couple of graphs I pulled last week that I’ve been meaning to post. Together they show that mandatory “stay at home” orders have been much more effective than voluntary social distancing.

First, here is a graph of the “change in distance traveled” by county during March:

Second, here is a graph of the average decline compared to normal distance traveled during the latter part of March: 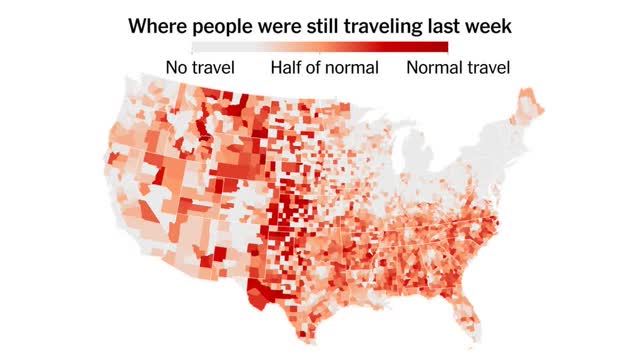 This graph largely overcomes the “retail desert” critique that people in rural areas must travel long distances to, e.g., the nearest grocery store, since it is a companison against *normal* travel in that area. Note that rural areas like West Virginia, parts of Indiana, and northern Michigan show a much sharper decrease in travel than areas in the South and Great Plains that were not under mandatory “stay at home” orders as of March 26 when the data was gathered.

It is not surprising that the sharp deceleration in the day by day increases in the number of infections happened once mandatory stay at home orders were issued. Since most of Dixie promulgated such orders within the past week or so, further deceleration is likely given the 2 week incubation period for the coronavirus.