This was the first pass (Ernie Tedeschi of Evercore prepared the data) and it is arranged by the percentage of loans completed in each state. As you can see Nebraska received ~81% of the loans applied for by the small businesses in Nebraska. One million, 35 thousand and 86 SBA PPP Loans (1,035, 086) were approved by April 13 totally $247, 543, 397, 521 by 4,664 lenders. Seventy percent of the funds were already allocated by April 13. 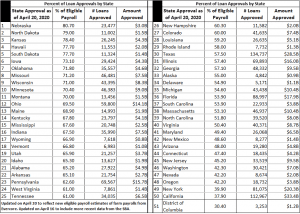 Some detail from Bob Clough at “CloughNotes” which looks at the numbers in a different manner after the leap.

Using the data from the three metrics, Bob Clough calculates a ranking for  each metric which are depicted in a map of dark shaded winner and light shaded loser states. 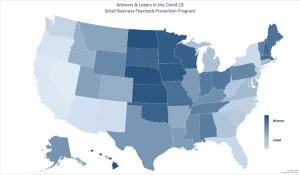 CloughNotes answers the question of where did the money go and was there a systemic bias favoring some states over the other states. Again dark shaded states benefited more so than the lighter shaded states. Politically based answers to this phenomena follow:

Bob Clough does not come out and claim a political conspiracy or political motivation. He does suggest the “disbursement of federal dollars absolutely has political impact and the extent to which it favors certain geographies over others cannot be ignored.” Bob has his own chart up which differs from the earlier chart above as he used different criteria in which to assemble it. I did take a snapshop of the top 10 states which included states which stayed open (green), swing states (WI and MN), other Repub states (IA in addition to states which remained open, and NH and HI. A brief comparison to the other spreadsheet shows.

Congress should review the impact of the first dispersal of funds and make the appropriate changes so as not to repeat the same funding patterns with an eye towards a lesser range of dispersal and a narrower per capita by employee distribution between states.