Coronavirus dashboard for April 4: with lockdowns in place, testing still far behind, no action on necessary “test, track, quarantine” plan

Coronavirus dashboard for April 4: with lockdowns in place, testing still far behind, no action on necessary “test, track, quarantine” plan

Here is the update through yesterday (April 3)

I’ve changed the format, moving the “just the facts, ma’am” data to the top, and comments at the end.

The exponential growth rate began to fall on March 24, but has not made meaningful progress in 6 days. Also, since testing has fallen further behind, some of the rate of growth may be hidden. Voluntary social distancing failed; we don’t yet know how well the State lockdowns are working.

Ben Engebreth is tracking coronvirus infection and testing numbers for each State, with graphs, here.
Number of deaths and infections and rate of increase of testing (from COVID Tracking Project)
Comparison of rates of increase in documented infections vs. testing

Result: The rate of testing had been failing to improve upwards until the past two days, meaning that we were actually falling further behind. Now we are catching up a little bit. Nevertheless, it remains far below what is needed, which is probably now at least 250,000/day. Note this target number is also increasing exponentially as we try to chase the number of exponentially increasing infections. 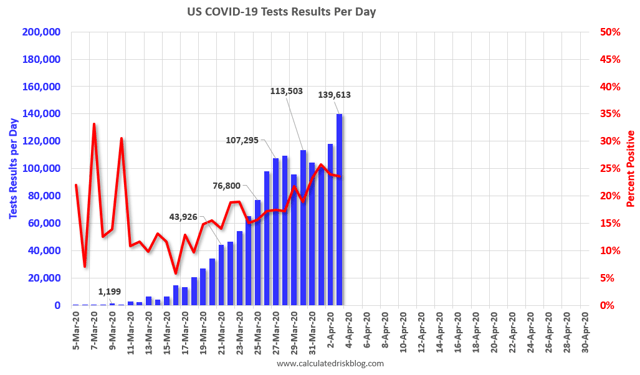 In South Korea, where aggressive testing has led to a near-total disappearance of new cases, the inflection point where the number of new daily cases plateaued was reached when the ratio of tests to new cases found reached 15:1. Any ratio less than that suggests that not enough testing is being done. Yesterday’s ratio of 4.3:1 continues to show that testing is falling further behind the level of new infections.

US States and population in total lockdown, business lockdown, and partial restrictions

*some local areas under lockdowns 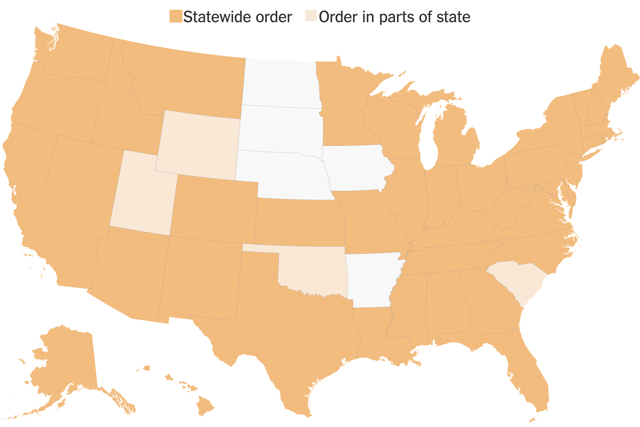 Following Trump’s reversal on Easter Sunday openings, almost all of the holdout States in Dixie have implemented lockdowns. About 95% of the US population is now under stay at home orders.

Here’s how we stand: