The best US solution to the coronavirus pandemic: SHUT.IT.DOWN — two weeks of China + one month of South Korea

The best US solution to the coronavirus pandemic: SHUT.IT.DOWN — two weeks of China + one month of South Korea

For the last few weeks, I have been screaming at the top of my lungs about “exponential growth.”   That’s because so few people realized the impact such growth could have in a pandemic, over the course of just a few months, even weeks.I first began thinking about this as soon as I read a Tweet by Trevor Bedford a month ago about how coronavirus had probably been circulating, undetected, in Washington for three to six weeks. I immediately thought, with a jolt, about what that meant in terms of exponential growth.

Looking back over my private correspondence, I see where I first voiced the likely impact back on February 27. Here’s what I wrote then:
——-
“The CDC only has 250 working test kits. They have *none* to spare to check for community spread. Thus the virus will spread for several weeks undetected until tests are administered among the first very sick. By then it will be too late.

“Meanwhile the Administration has clamped a gag order on the government scientists. To my knowledge, it has taken no action to obtain the thousands of test kits that are needed from other countries.

“In short, malpractice by the Buffoon in chief could easily lead to tens of thousands of unnecessary deaths.”
——-
And so I started shouting from the rooftops about exponential spread. Nothing since then has caused me to change my mind.

By now, at least among those who are able to listen and comprehend, exponential growth has been accepted as the immediate course of the pandemic. Steps have been taken, of greater or lesser effect, in a number of countries to stop it.

Today I want to switch gears. Because I am congenitally predisposed to thinking about what we are able to control – how to come up with a solution to when we cannot avoid being rolled over by a bulldozer.

So, here’s what I think we need to do to stop the exponential spread of this disease:

Unlike South Korea, but very much like China, the US waited too long to test for the spread of this virus. In the past 24 hours, the number of diagnoses of coronavirus infection has grown by almost *5000.*  Just for one day.

In South Korea, they had one central focus – an extreme religious sect -for the spread of the virus. Even so, it took a ratio of 15 tests to 1 positive result over a period of about a week for South Korea to bring its pandemic under control.

15 x 5000 positives = 75,000. That’s the number of tests the US would have had to administer yesterday to bring it up to South Korea’s standard. Actually, yesterday there were only 27,000 tests.

In short, the US is continuing to *lose* ground.

To be blunt, to prevent a worst case scenario – one which will be upon us in a matter of several months, if not several weeks, the US needs to take more drastic action.

The ultimately voluntary “social distancing” that has been put in place has been violated constantly by the Young Invulnerables, as we have seen from photos of packed bars and restaurants last weekend, to packed beaches in Florida earlier this week. We might slow down the exponential spread of the virus, but frankly, I think this approach is ultimately going to fail.

THE US NEEDS TO TAKE THE CHINESE APPROACH. China’s national government shut down virtually the entire country for about two weeks. During that time of enforced national quarantine, the spread of the virus was brought to a halt. Since the virus’s latency period is one to two weeks, that was all it took to break the chain of transmission.

The Federal government in the US almost certainly lacks the Constitutional authority for such a national lockdown. But the Constitution reserves all powers not granted to the Federal government to the States, and the States have what is called “police power.” “Police power” is why Massachusetts was able to completely shut down the Boston metropolitan area while they searched for the Tsarnaev brothers. It’s why Gov. Gavin Newsome had the authority to completely lock down California effective last night.

California’s example should be followed immediately by every other State in the Union. the federal government can offer the services of the National Guard to help enforced the lockdown. If some States (mainly “red” States) refuse to go along, then governors on a regional basis need to form their own “cordon sanitaire.” I am thinking such a map, of two or possible three such regions, would look very similar to the 2008 Electoral College map: 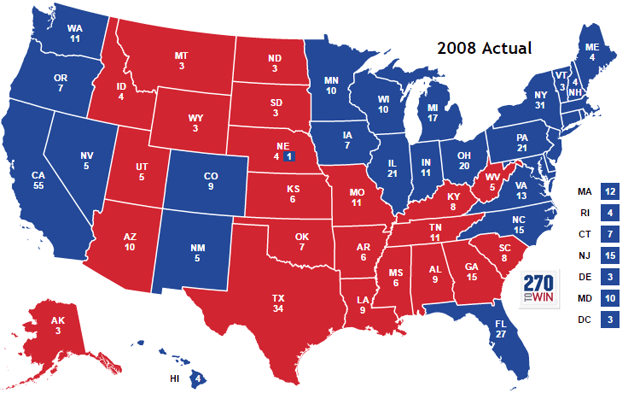 In addition to the above, I can easily see Kentucky and Kansas  (New Democratic governors), and also Arizona, Utah, and even Texas (which shut down its bars and restaurants yesterday) potentially joining in the interstate shutdown.

In such a case, each governor should contribute their own State’s national guard units to make sure that there is no entry from other, non-locked-down States, into the area.

While the two week regional or national lockdowns are in effect, ICU facilities and more than anything else, testing, needs to be ramped up and available in large numbers for when the lockdown ends and inevitably a few new hot spots start to emerge.

In short, two weeks of China followed by one month of South Korea is the US’s best chance of bringing this pandemic under control without a ghastly number of fatalities, and catastrophic economic damage.