How Low Can You Go?

This is not a prediction. Only an observation. From 1952 to 1996, U.S. nominal net worth of households and non-profits tracked nominal GDP pretty closely. Net worth remained pretty close to 15 times GDP. That consistent relationship ended after 1997. In the third quarter of 2007, net worth was nearly 20 times GDP but by the second quarter of 2009 it had reverted to just 17 times GDP. One might argue that it was roughly 15 times what trend GDP would have been at that time.

In the second quarter of 2019, net worth was 21 times GDP  or about 28% above the historical norm from 1952 to 1996. To revert to that historical norm would entail a loss of asset valuation of around $32 trillion. 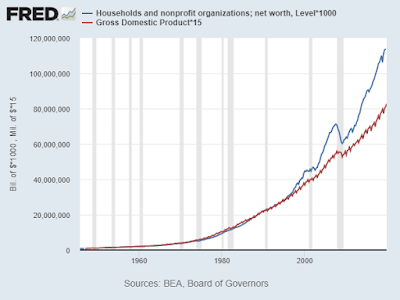