by David Zetland (One handed economist) 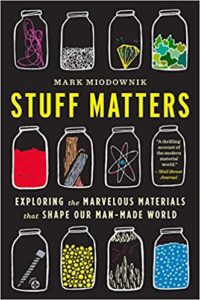 Mark Miodownik’s 2014 book is another in the most-welcome genre of “pop science” — a genre of books that explains scientific ideas in clear and comprehensible prose.

Miodownik’s insights into the abundant materials surrounding us (glass, steel, plastic, etc.) really help you grasp the miracles that scientists, engineers, entrepreneurs and geeks have brought to our lives. The paradox is that “stuff” costs us so little that we often forget its tremendous value. (One of Miodownik’s funnier lines guesses at what would happen if we thought more deeply about the value of concrete: We’d be “treated as lunatics if we spent the whole time running our fingers down a concrete wall and sighing.”) This book highlights those values while explaining how we got access to the stuff and the ways in which various stuff has transformed human existence.

Indeed, humans trace their own history in terms of access to stuff. From the Stone Age, Bronze Age, and Iron Age, we have moved into the Hydrocarbon Age, which may be — if the negative impacts of fossil fuels arrive as predicted — the last age of positive improvements before the cycle reverses, and we put our energies into defending and withdrawing rather than building and expanding.

Each chapter in the book covers a different material, so I will (as usual) transcribe and expand on the notes I made as I was reading.

Ceramic: Incredibly hard, brittle substance that we continue to use for dishes, sinks, etc. when less fragile materials are available — probably because of its delightful aesthetic.

Steel: Carbon alloyed into iron makes a stronger material because different-sized atoms mix into a stiffer crystal-latticework . Carbon does not stiffen tin or bronze, so it was a surprise when “overworked” iron came out of the forge, stronger. The science behind that surprise took centuries to understand, which is why swordmakers surrounded themselves with myths and secrets. Stainless steel has a “transparent protective layer of chromium oxide that makes the spoon tasteless, since your tongue never actually touches the metal and your saliva cannot react with it” [p 19].

Paper: Cheaper and easier for writing than animal skins (e.g., vellum), paper’s killer technology was the “codex…—a stack of papers bound to a single spine and sandwiched between covers—… that it allows for text on both sides of the paper and yet still provides a continuous reading experience… [T]he advantage of the codex, with its individual pages, is that many scribes could work on the same book at the same time, and after the invention of the printing press many copies of the same book could be created at the same time” [p 30].

What is it about paper that allows words to be expressed that might otherwise be kept secret? They are written in a private moment, and as such, paper lends itself to sensual love—the act of writing being one fundamentally of touch, of flow, of flourish, of sweet asides and little sketches, an individuality that is free from the mechanics of a keyboard. The ink becomes a kind of blood that demands honesty and expression, it pours on to the page, allowing thoughts to flow [page 50].

Concrete: A mix of cement and stones that will be weak if too little or too much water is added. Cement is made by breaking and then baking rocks rich in calcium carbonates and silicates at 1450C, at which point a calcium silicate ash, or cement, is available. The Romans did not have the “firepower” to make cement, but they were able to mine natural cement from volcanic deposits near Naples and build bridges, domes and arches — even underwater (cement still sets underwater). The Romans could only use  concrete when it was “compressed” (pushed down). We had to wait until 1870 before building concrete structures that would resist bending, and that was possible because steel embedded in concrete would expand and contract at the same rate as the concrete that it now “reinforced.” One fascinating cement product is “cement cloth” that can be used to make robust shelters.

Chocolate: Dark chocolate is made by separating cocoa nut power and cocoa fat and then recombining them in the right ratio: “Through sheer ingenuity, we have found a way to turn an unpromising tropical rainforest nut that tastes revolting into a cold, dark, brittle solid designed for one purpose only: to melt in your mouth, flood your senses with warm, fragrant, bittersweet flavors, and ignite the pleasure centers of the brain” [p 77].

Plastic: Although plastic was the material of the future in 1967 (“Plastics“), it was first put into use in photography in the 1880s! Plastics then went on to compete with wood (Bakelite), silk (nylon), and flesh (silicone). Plastics also allowed for novel uses such as vinyl albums.

Glass: First discovered where lightning had struck sand, glass came into wider use once glassblowing was discovered in Roman times. Stained glass, larger windows and mirrors came into use over a thousand years later, as techniques for forming molten glass into sheets evolved. The arrival of cheap crystal glass in Bohemia in the mid 1800s set off a revolution in beer brewing, as people shifted from “muddy” beers (think Guinness) to light, golden Pilsners (also first brewed in Bohemia). Glazing tools are needed when moving glass.

Carbon: Diamonds are strong but hard to form into shapes. Graphite can be spin into fiber and woven, mixed with epoxy, to make carbon fiber composites.

…and then there is the scale on which we experience these materials:

The miniature scale combines the atomic structures, nanostructures, microstructures, and macrostructures into a structure that is just visible to the naked eye. This is the scale of a piece of thread or a strand of hair, the scale of a needle and the line width of this font size. When you look at and feel the grain of wood, you are seeing and feeling the combination of all these structures at the miniature scale. This combination gives wood its characteristic feel of being stiff but not too hard, of being light and warm. Similarly, ropes, blankets, carpets, and most importantly clothes are made at this scale, and the strength, flexibility, smell, and feel of these materials are the result at this scale of the combination of all structures embodied within them: a thread of cotton may look superficially similar to a thread of silk or Kevlar, but it is the hidden detail of their atomic-, nano-, micro-, macro-, and miniature structures that makes the difference between something that can protect against a knife or feel as smooth as cream. It is at this scale that our sense of touch engages with materials.

Because of this strong connection between the materials and their social role, the materials that we favor, the materials that we surround ourselves with, are significant to us. They mean something, they embody our ideals, they give us part of our identity… designers and architects consciously use these meanings to create clothes, products, and buildings that we like, that we identify with, that we want to surround ourselves with. In this way the meanings of materials are reinforced by our collective behavior and so take on a collective meaning.

I highly recommend this book (5 stars) as a fun and engaging tour among the materials that enrich our lives. Read it.