December starts out with a thud

December starts out with a thud

The first reports in December are in, and both were negative.

Since actual spending on residential construction doesn’t take place until the house is started, it lags building permits (red in the graph above). So given the strong rebound in permits, I’m not concerned at this point about a renewed decline in construction, as I expect it will follow permits as well. 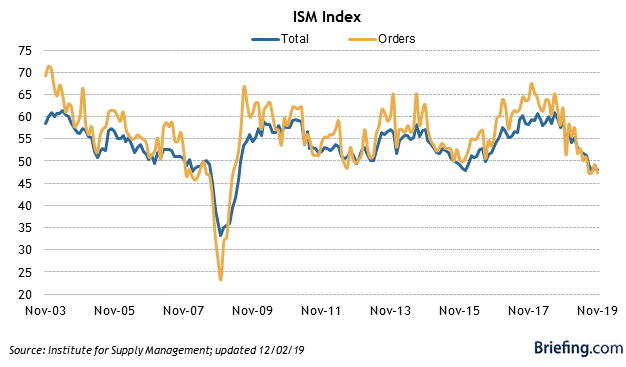 In the past it has typically taken at least two readings below 48 for the overall ISM manufacturing index to indicate recession, so the main indication here is that manufacturing may be in a shallow recession, but the economy as a whole is close to flat.

On the other hand, the new orders index is already at a level which has been consistent over the past 70 years with a recession in the very near future – although it is also consistent, as for example in 1966, with a slowdown only (note: ISM doesn’t allow FRED to publish its new data, so the below is a long term historical graph that ends in 2013):

Since the manufacturing sector in the economy is a smaller segment now than at any point since these series were started almost 75 years ago, the shallow  downturn there will have less repercussions than in the past.

A year ago I pointed to this quarter as being the epicenter of when I expected the downturn in the long leading indicators to have the most impact. That certainly appears to be the case. As the same time, I think the economy as a whole is more likely to remain in a slowdown than an outright contraction.