Although they account for about 90% of the entire housing market, existing home sales are the least consequential to the economy. That’s because building new homes entails a bunch of economic activity, from architects, builders, building trades contractors, landscapers in the building process, followed by furniture, appliances, and yard improvements after the owners move in. Existing home sales on average have very little of the former, and much less of the latter.

But because existing homes compete with new homes for living space, it’s worthwhile to note that they confirm what we’ve been seeing in new home sales and construction this year; namely, a recovery brought about by lower interest rates.

The NAR doesn’t permit FRED to post its data. So here is a graph of existing home sales for the past twenty years from Dshort.com: 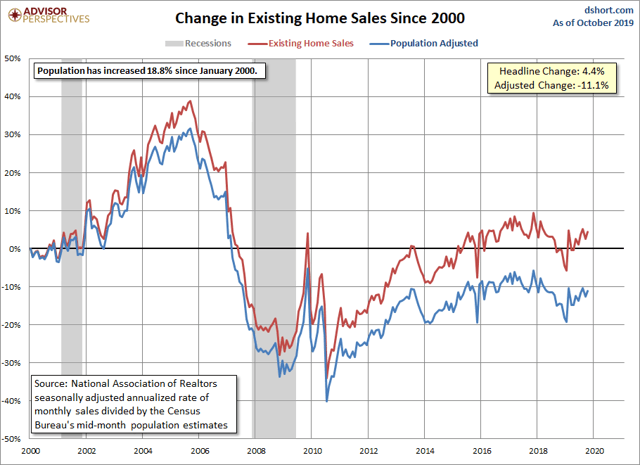 For my purposes, you can ignore the blue, “population-adjusted” line. Note the significant declines in sales following the rise in interest rates in the second half of 2013 and again in 2018. The low point was this past January. There is a well-established uptrend in place since then – which is the same thing we see with new houses, which also bottomed earlier this year.

But if the news in sales is good, I am concerned about the renewed push in median prices, which were up 6.2% YoY in October to $270,900. Because prices rise and fall seasonally, we have to look YoY: 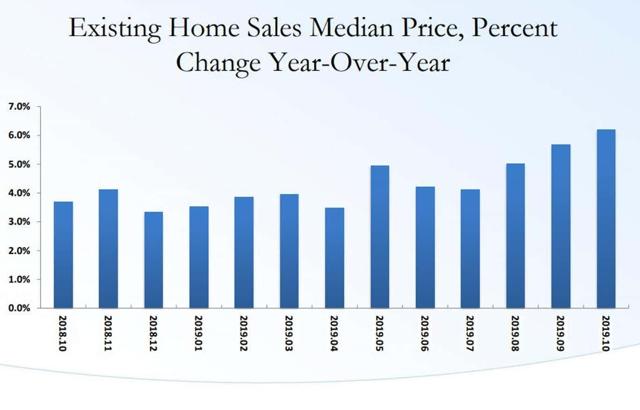 Here is a look at the past four years. In that time, median existing home prices have risen 23.1%: 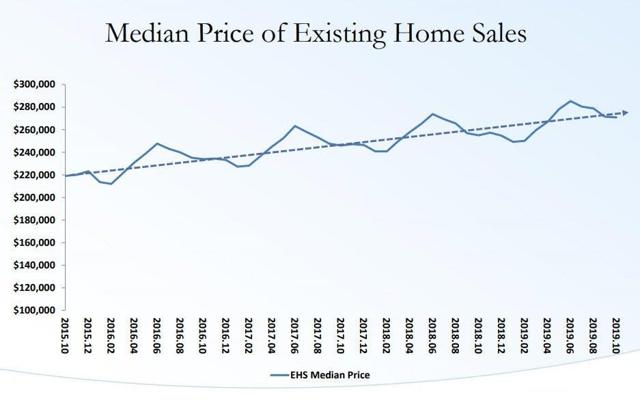 Meanwhile median household income, measured nominally, increased 5.1% YoY in October, according to Sentier Research (H/t Political Calculations). It is also up 16.2% from four years ago: 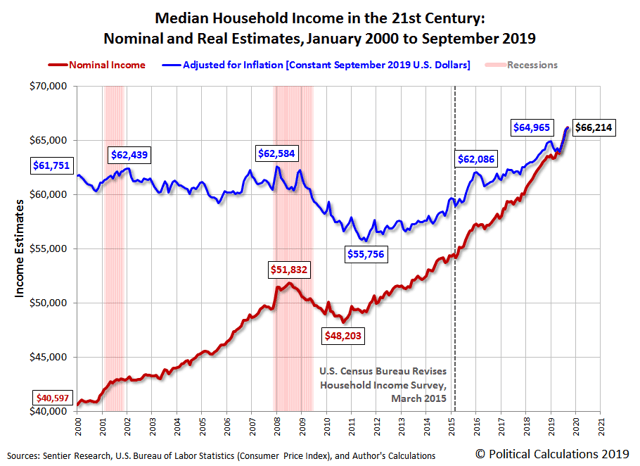 Which means that median house prices are once again outstripping gains in household income.

Recently I’ve applied the idea of a price “choke collar” to the housing market, by which I mean that while any significant decrease in interest rates will provoke a revival in housing construction and sales, the resulting increase in prices beyond the ability of households to compensate will put a ceiling on that rebound.

I don’t think we’ve hit that ceiling yet. But it something to keep an eye on in 2020.