Plastic: Part of the Problem . . . Part of the Solution – Part 2: the European Union’s Solution

As you can read for yourself, this is the second part  of the series. This part will introduce the EU’s proposed solution to plastic waste material of which Sesotec is to be a part of the solution. Since I am using Sesotec’s information, I will be stating their name as owner’s of this information from time to time.

Some 70 years after the first plastic products hit the market, a world without plastic waste still appears far off. We need a different approach to dealing with what many consider to be rubbish – and we need it fast. In this multi-part series, we will take a look at the role that the waste management and recycling industry can play in the process. Part I took us to China. Now it is time to take a look at Europe.

China is no longer taking on the world’s plastic waste, and our oceans could soon be home to more pieces of plastic than fish. The time to act is now.

There are many ways to reduce plastic waste. Banning their use is one of them. A great deal of plastic packaging is, in fact, unnecessary. Yet it also offers benefits in certain areas, such a hygiene and shelf life, making a complete ban rather unrealistic.

Another approach is to avoid plastic in many situations and to practise “plastic fasting”. Still, even that will not work everywhere, especially in the industrial sector. It is therefore essential to find an alternative solution – one that is also reflected in the EU’s plastics strategy: a circular economy.

The European Union presented its plastics strategy on 16 January 2018. Under the strategy, all plastic packaging must be either reusable or recyclable at low cost by 2030. One of the EU’s goals in its plastics strategy is to stop marine litter. The long-term goal must be to avoid marine plastic waste entirely. However, creating a circular economy and recognising the value of a material that is widely considered to be refuse will be essential to achieving this aim.

The overall EU strategy is based specifically on four basic tenets:

Past the leap, the EU’s Commitment

By implementing this strategy, the EU is voicing a commitment – an absolute necessity given the waste and recycling figures.

So far, recycling rates have been low around the globe,
ranging from 30% in Europe and 25% in China
to just 9% in the US (plastic waste statistics for 2017).
Much of that waste ends up in landfills or
is incinerated, posing a risk to our groundwater and the air.

Projects such as Pacific Garbage Screening are currently trying to develop technologies and methods for collecting waste. The massive quantities of refuse destined for the world’s oceans could be separated using appropriate sorting systems and reused efficiently if it were possible to fish them out of the water at the mouths of rivers – something that would also be in line with the EU’s plastics strategy.

The circular economy in the real world 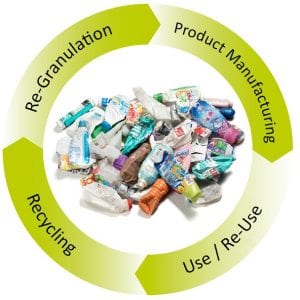 So how does a circular economy work? Recyclability must be taken into account when designing packaging. That is because the material itself has to be as pure as possible in order to actually be able to use plastic waste or used plastic as a secondary raw material and convert it into recyclates with the quality necessary to manufacture new products, no matter where in the world this process takes place.

Tags: Waste Management Comments Off on Plastic: Part of the Problem . . . Part of the Solution – Part 2: the European Union’s Solution | Digg Facebook Twitter |