I looked at this at first, wondered what it depicted, thought it might be a piece of art, and puzzled over it a bit. It is a topographical depiction (Lidar) of the Mississippi River. If you look closely, you can see roads and various plots of land in addition to the movement of the river bed over time and the various elevations.

One of the key techniques used in modern cartography has its beginnings in 17th century map-making. Relief shading techniques as shown by the darker and lighter areas give dimensions such as height (lighter) and depth (darker) areas to maps so a viewer of the map could understand the terrain. For a hiker, an army, someone buying a piece of land, or building a fence, etc. could understand the area depicted and prepare for and not be surprised by it upon coming upon it. Today, GIS specialists can use applications like Photoshop and other digital software to create relief shading online. 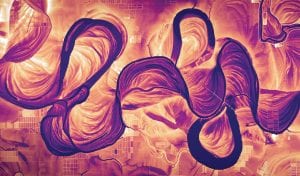 What is this and how is this done? “Vibrant maps from aerial laser data — known as Lidar — show the position and elevations of the Mississippi river. This stretch shows historical movement and shape-shifting across three counties in Mississippi.” If you click on the link, you can also see the hand drawn topographical maps charted by Harrold Fisk in 1944 using aerial photography. In themselves, these  skillfully drawn maps are pieces of art which would depicting the same.

The National Geographic article shows similar topography maps of  “The Mississippi River, it’s hidden history, as uncovered by lasers” The laser depicted images are done by Daniel Coe a cartographer for the Washington Geological Survey using Lidar, a system of laser pulses also sent from aircraft to measure topography.

So, why the interest? Prior to leaving the Marine Corp, I had an opportunity to study surveying and also topography mapping as a way to a head start in finding a job once discharged. When I left the Corp, jobs were not plentiful, and I went to college instead. Even so, I was prepared for the transition by doing something in which I had an interest.